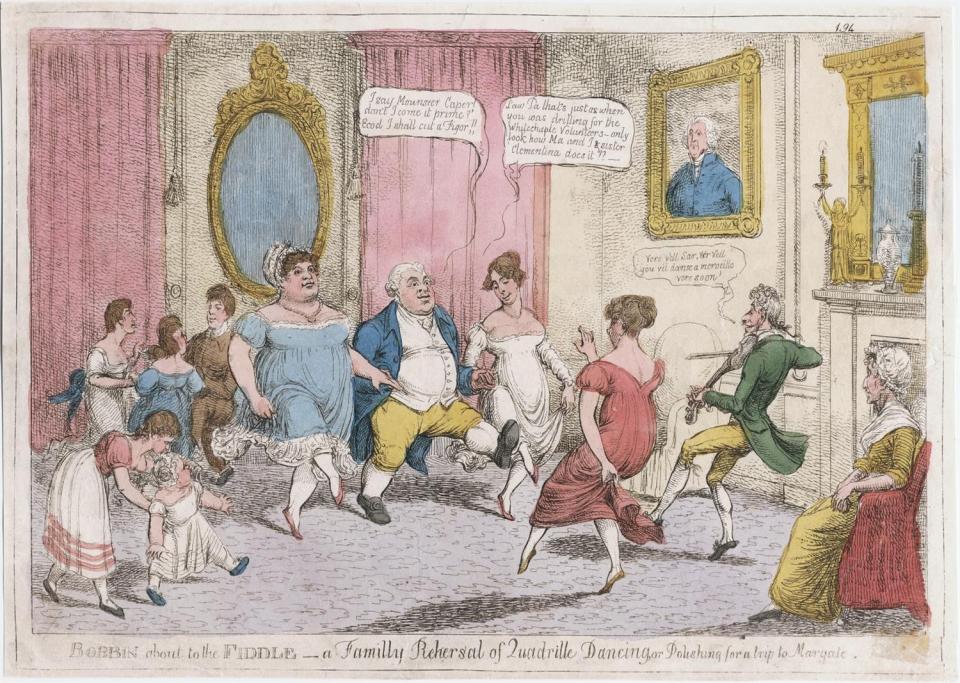 Dr Katrina Faulds and Dr Wiebke Thormählen have produced a multimedia resource for the Sound Heritage website, drawing on fascinating new research into the history of social dancing. Domestic and Social Dance in Georgian Britain includes bespoke arrangements of dance music sources by Dr Robert Percival and specially made recordings that are freely available for download and use.

Social dance was a central pastime both within and outside the home in eighteenth- and early nineteenth-century Britain. Evidence of this practice, however, confounds today.  Keyboard arrangements of dance music flooded the market: original dance compositions were offered alongside arrangements of large-scale instrumental music and operatic arias. At the same time, newspaper reports, advertisements, letters, payment records and diary entries document bands of different sizes and make-up in the home, and paintings, engravings and caricatures illustrate contexts and settings.

As part of the AHRC-funded Music, Home and Heritage project, Katrina Faulds and Wiebke Thormählen delved into the remnants of this once lively musical past to construct resources for understanding and recreating historical dance music and social dancing. Robert Percival created arrangements of selected repertoire to try out different documented instrumental combinations, and together with professional early music experts and students from the Royal College of Music, the team explored the historical material through their hands and ears. The challenges of working with different group sizes and experiments in instrumental balance, ornamentation practices, and instrument types - including the puzzling case of how harps were used for dance music - are documented in “Performing Practices Lost and Found,” a reflective essay included in the new resource.

Both the music tracks, and scores and parts for the arrangements, are available for free download and use by music ensembles, historical dance groups, researchers, teachers and heritage professionals.

Domestic and Social Dance in Georgian Britain is a major contribution to the history of dance as a social and cultural activity. The scores and sound recordings bring this new research into practical forms that will empower musicians, dancers and others to launch their own explorations into the lively and fascinating world of Georgian dance.

Payment to Mr Jones the Harper for music at Powderham Castle, August 1790

The project was generously funded through an AHRC Large Research Grant and was supported by the Royal College of Music and the University of Southampton. It was conducted in partnership with the National Trust, the British Library, Sydney Living Museums and the Buccleuch Living Heritage Trust.

“Bobbin About to the Fiddle”: New Resource for Domestic and Social Dance in Georgian Britain
Sounding Erddig, Listening to the Past
Sacred Stories at Tatton Park
END_OF_DOCUMENT_TOKEN_TO_BE_REPLACED