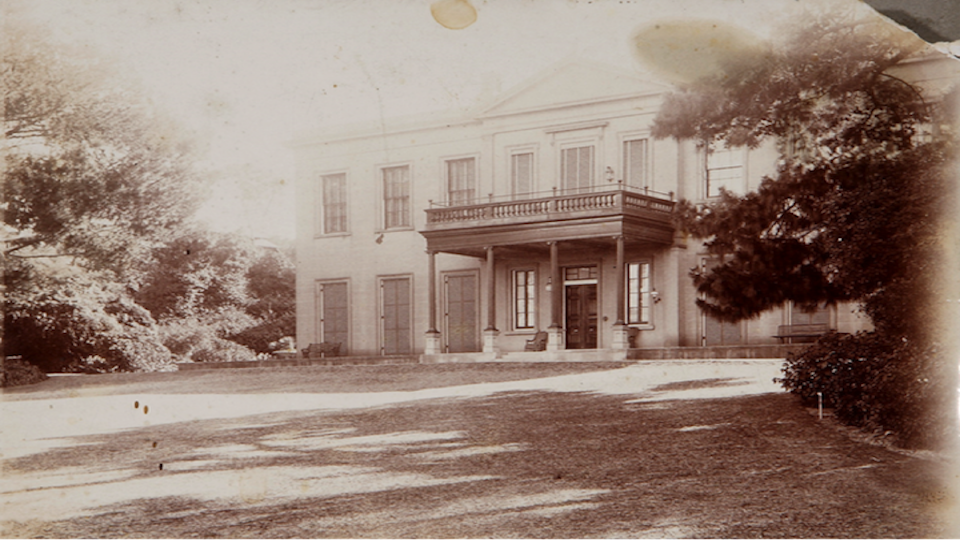 Elizabeth Bay House is the most elegant and sophisticated house of the 1830s in New South Wales. It was built between 1835 and 1839 as the home of Alexander Macleay, who was the Colonial Secretary of New South Wales from 1826 to 1837.

The house is renowned for its early Australian craftsmanship, which is most evident in its cedar joinery and graceful cantilevered stone stair. Its wealth of Greek Revival detailing includes imported fittings such as plaster ceiling roses, iron stair balusters and marble chimneypieces. 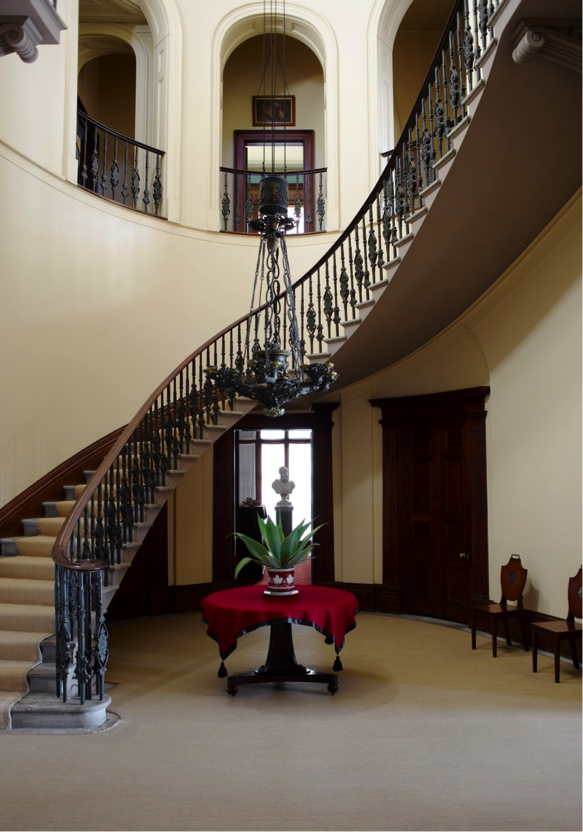 While the house has survived, its once renowned garden has fallen victim to urban development. To date, the house has been a family home, an artists’ squat, a venue for receptions and at one stage, was divided into a series of flats.

In the early 1960s Elizabeth Bay House was acquired by the state government and, in 1981, it become one of the first properties of the Historic Houses Trust of New South Wales (now branded as Sydney Living Museums). In 1988, the Trust adopted a policy to interpret the house according to the evidence available of its occupancy by Alexander Macleay and his family between the years 1839 to 1845. The interiors continue to be refined to this end.

In a collaboration between Sydney Living Museums (SLM) and the Sydney Conservatorium of Music (SCM), the purpose of the Dowling Project has been to explore the musical world of an early Sydney couple, Lilias and Willoughby James Dowling, in an 1830s and 40s domestic setting. While some of the couple’s sheet music has survived, their large Sydney home was demolished in the 1920s.

Students from the Historical Performance Unit (HPU), at the SCM, have been guided through the historical music resources at the Caroline Simpson Library & Research Collection (CSL&RC), toured Elizabeth Bay House and attended rehearsal workshops at the SCM and in the drawing room at the house. Sydney Living Museums supplied sheet music from the Dowling Songbook (R84/869:1-2) and the Stewart Symonds Sheet Music Collection. The SCM installed an 1840s Collard & Collard square piano in the drawing room at Elizabeth Bay House for the three concerts, held 7-9 October, 2016. The concert on 9 October was a public event.

In 2011, while examining the sheet music collection at Rouse Hill House & Farm, Sydney Living Museums’ musicology consultant, Dr Graeme Skinner, made an important discovery. Graeme found a previously unidentified volume of British sheet music arranged for voice and piano which had been bound together in c.1840 by Sydney music-seller Francis Ellard. Half of the volume contained music for a female singer, while the remainder would have been performed by a male – clearly a ‘his and hers’ collection. A discovery of national significance, the volume, now known as the Dowling Songbook, is the earliest known collection of music locally purchased and bound in Australia. 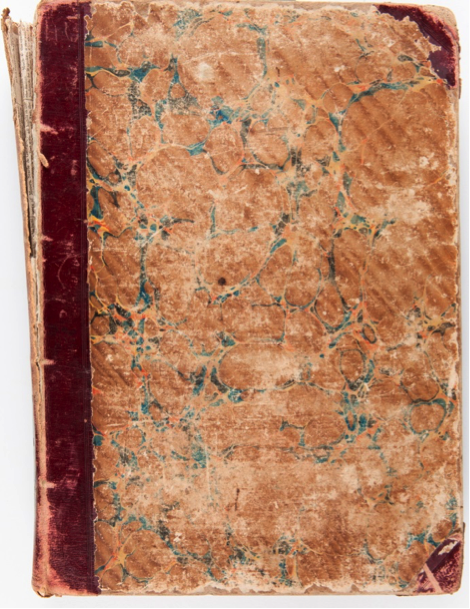 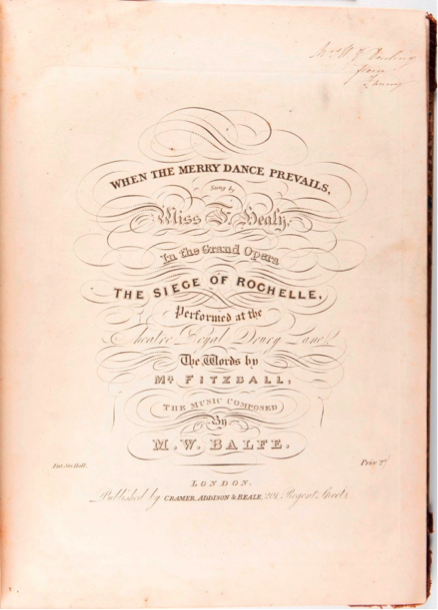 In addition to print and manuscript sheet music, the volume contains Grosse’s Instruction in Singing, a treatise published in London in the late 1820s. Pencil markings on some of the songs in the Dowling Songbook suggest this publication had been used for singing training by its Sydney owner in the 1830s.

The Dowling Project is part of an ongoing program led by the Caroline Simpson Library & Research Collection which provides greater knowledge of, and access to, SLM’s historic book and sheet music collections.

It was CSL&RC staff who identified the original owners of the songbook as the young and well-connected Sydney couple, Lilias and Willougby James Dowling, and uncovered their little-known and rather racy story.

The Music of an Extraordinary Colonial Couple

The home of young Lilias Dickson (1818-1869), near what is now Darling Harbour, was located next door to her father’s flour mill. It was here – the place where the industrial revolution in Sydney began – that Lilias (or Lilly) commenced the drawing, music and dance lessons typical of a wealthy girl in the colony. Governor Lachlan Macquarie had been enthusiastic about John Dickson’s arrival in Sydney in 1813, armed as he was with £10,000 and Australia’s first steam engine. Twenty years later Dickson was described as ‘a person of questionable reputation’ having absconded from the colony in response to a charge of forgery. 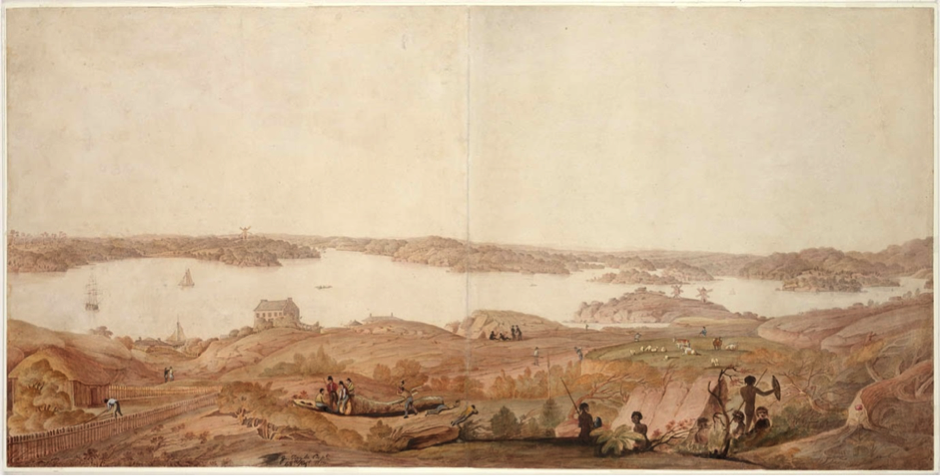 The abandonment of Lilly and her six young siblings by their father in 1833 was one of a litany of disasters faced by Lilly that year, which had included the death of her mother and the loss of Lilly’s reputation following a scandal involving a visiting conman. While accounts vary as to the exact detail, it appears that 15-year-old Lilly had taken a fancy to an ex-convict, John Dow, better known as Viscount Lascelles. Following a fight with her father, Lilly ran off to Parramatta where she stayed for a day or two with Lascelles before returning home. Upon hearing the news that Lilly’s father had absconded, Lascelles set his eye on the girl’s fortune and took her to court claiming that the couple had married while at Parramatta. The case was dismissed but Judge James Dowling observed that Lilias Dickson was a girl of a ‘light reputation’. He was later horrified when his young nephew, Willoughby James Dowling (1812-1849), married the 16-year-old Lilly less than three months later.

The couple lived at ‘Flinton’, a 14-room house in Paddington, where their three children were born and where much of their sheet music was probably played. Employed as a solicitor by John Norton, Willoughby moved his family to Bathurst in 1841 following charges of financial irregularities. Continuing as a solicitor, he battled with alcoholism and, in 1849, Willoughby shot himself at home after days of heavy drinking. Lilly immediately sold her possessions and travelled to England to stay with her parents-in-law. She returned to Australia in 1851, later remarried and moved to the Southern Highlands where she died, in 1869, at the age of 51. 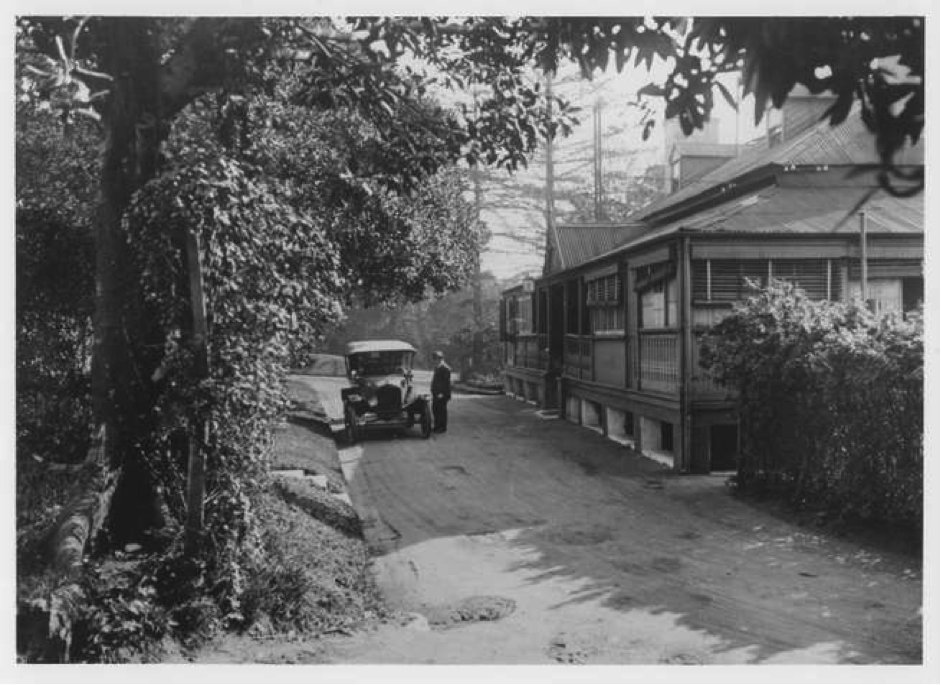 Flinton, Paddington, 1920, not long before demolition. Source: The Benevolent Society

In November 2015, Dr Matthew Stephens, Research Librarian, Sydney Living Museums, approached Professor Neal Peres Da Costa of the Historical Performance Unit, Sydney Conservatorium of Music, with a challenge. Neal was asked if he could bring to life the musical world of the Dowlings in one of SLM’s house museums.

SLM was able to provide the sheet music as well as the perfect interior - the drawing room at Elizabeth Bay House – where both performers and audiences would be immersed in a visual and aural setting similar to one that would have been familiar to the Dowlings. Excited by the challenge, Neal’s students investigated how the singing treatise bound with the collection could be used to perform the Dowlings' sheet music. 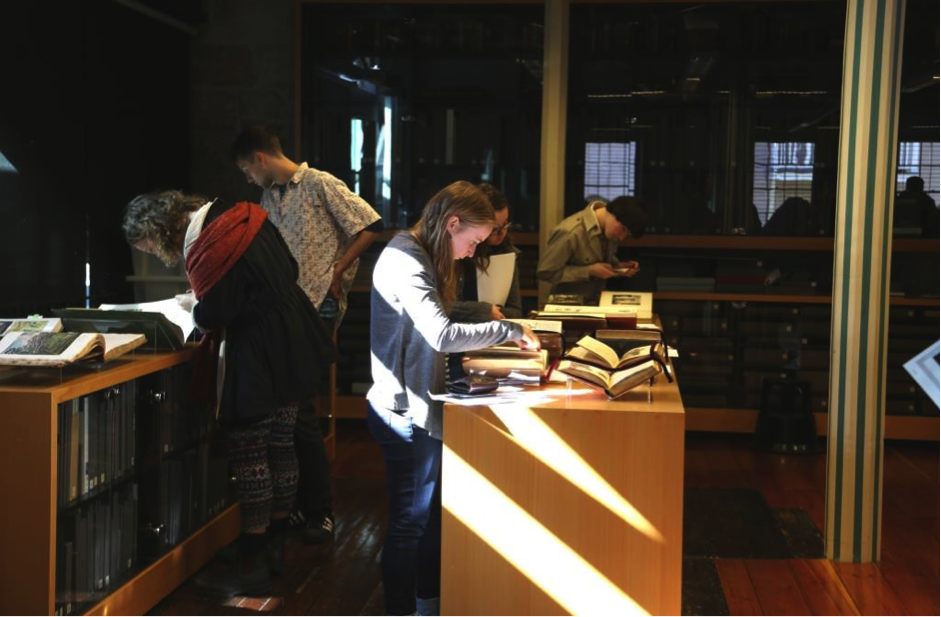 A week later, the cohort met at Elizabeth Bay House for an extended tour of the house and its collections. This was followed by rehearsals at the SCM and then weekly workshops in the drawing room at Elizabeth Bay House. The room was specially configured for the rehearsals and the performances but with the intention of removing as little of the furniture as possible. Twenty-five reproduction regency chairs were placed in the room for the audience in a domestic arrangement that avoided rows, while an 1840s Collard & Collard square piano acquired by the SCM for the project was also installed in the drawing room for the onsite workshops and performances. 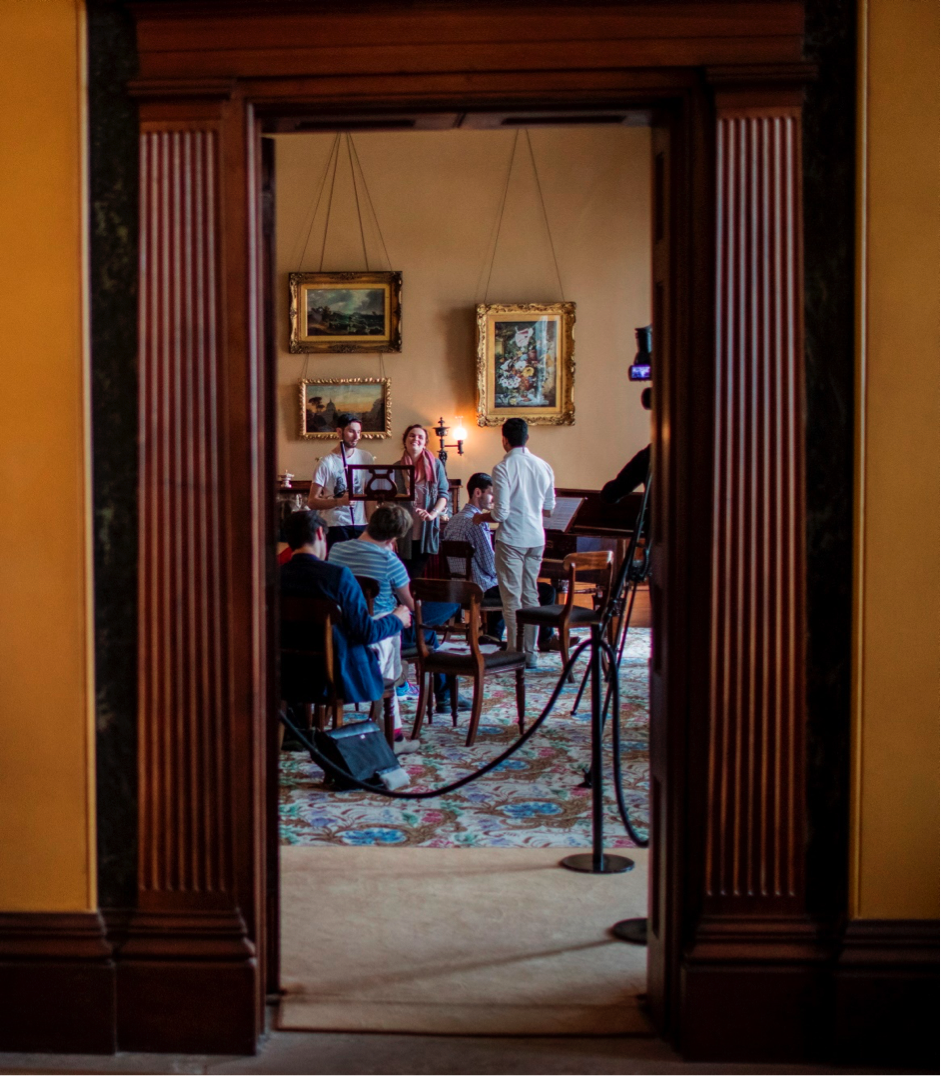 One of the musical challenges for the performers was the interpretation of the ornamentation marks pencilled into a number of the Dowling songs. It was often hard to interpret what had been meant, particularly given the ‘foreignness’ of even some of the clearest annotations made by the early users of the scores. Neal Peres Da Costa constantly encouraged the students to look at Grosse’s Instruction in Singing bound with the sheet music to help suggest strategies to interpret the pencil ornaments and the songs more generally. 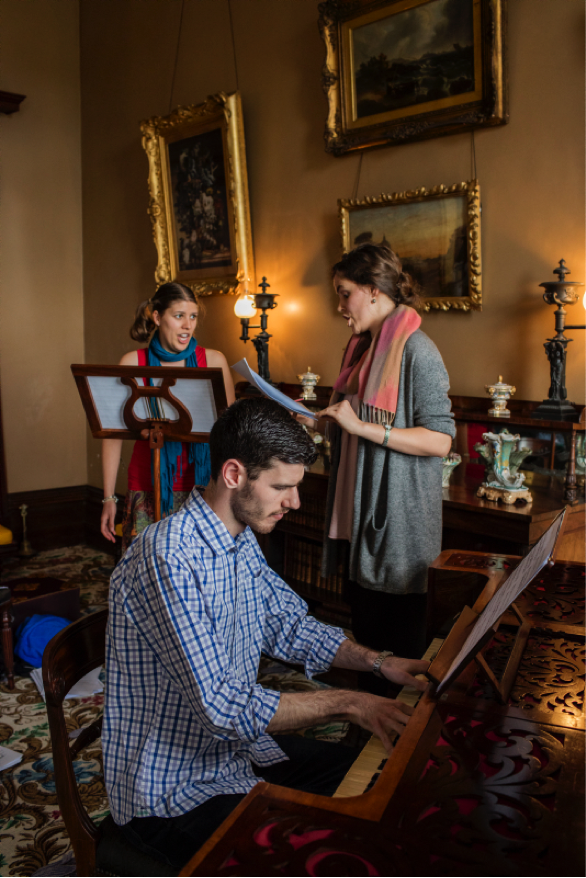 At each of the concerts, the audience was led into the dining room to view the original scores being used by the students for the performances. To broaden the repertoire further, SLM offered Neal two additional bound volumes of sheet music (containing over 60 publications) which are contemporaneous with the Dowling Songbook. The first is a volume belonging to Maria Lee, who lived in New South Wales, and contains music published between 1825 and 1845. Unlike the Dowling Songbook’s British scores, this volume containing 40 pieces includes examples of some of the earliest music editions published in Sydney. The second volume belonged to a Scottish woman, Lucy Havens, who immigrated to Sydney in 1839, and contains 24 pieces she brought with her. 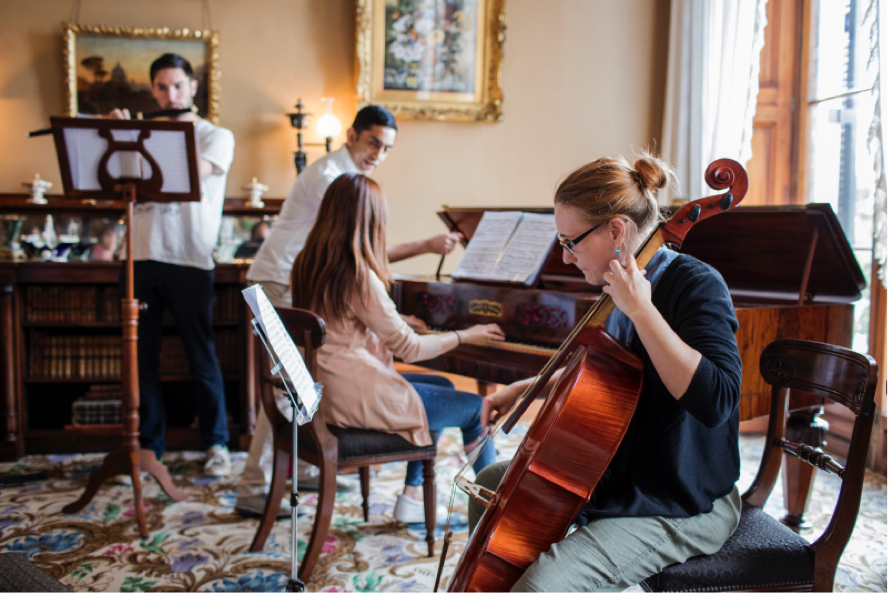 Matthew Stephens shared the Dowling story with the audience while they looked at the original scores and a facsimile of the Dowling Songbook. This was followed by Neal Peres Da Costa’s discussion of the Dowling Project and the opportunities it offered students interested in historically informed performance. The audience was then led into the drawing room and asked to leave their 21st century preconceptions as to how an audience should behave at the door.

The project has been enthusiastically received by performers and audiences alike. Many commented on the intimacy of the room, and a wonderfully warm and clear acoustic that suited the music perfectly and was a surprise to us all.  Film of the process and interviews with all those involved in the project will be used to develop a small web documentary which is planned for release in early 2017.

S. Lover The Letter from Songs of the Superstitions of Ireland

G. Rossini Sweetly on the Wings of Morning

I. Pleyel *Allegro (first movement) from Trio No. 2 B.432 from Six Sonatas

for Pianoforte or Harpsichord with an Accompaniment for the Flute or

M.W. Balfe The Light of Other Days

J. Hook *Within a Mile of Edinburgh; a Celebrated Scotch Song

J. Parry *The Voice of Her I Love

“Bobbin About to the Fiddle”: New Resource for Domestic and Social Dance in Georgian Britain
Sounding Erddig, Listening to the Past
Sacred Stories at Tatton Park
END_OF_DOCUMENT_TOKEN_TO_BE_REPLACED