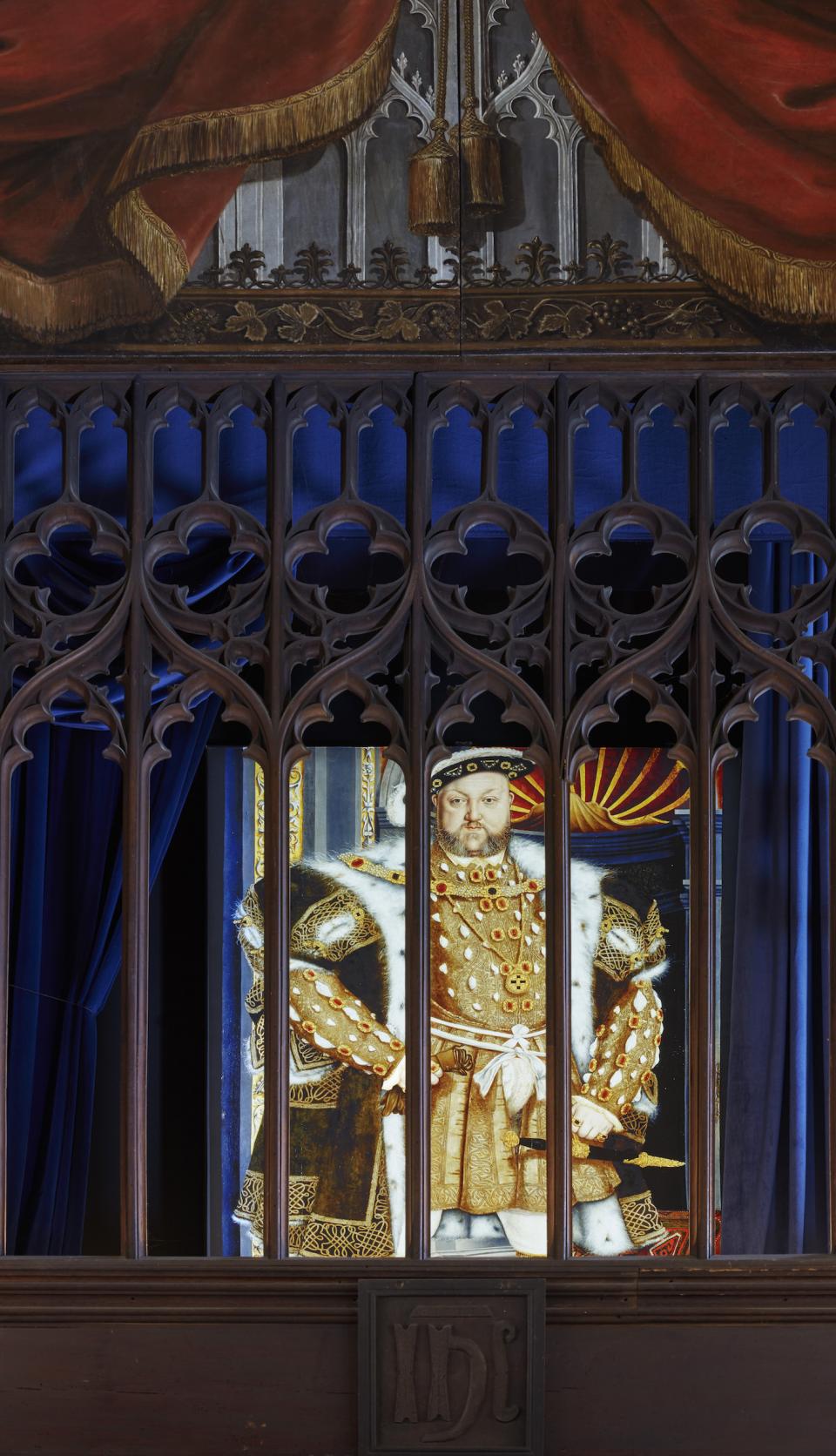 The House and Collections

In the early sixteenth century, William, 1st Lord Sandys (d. 1540) created a superb Tudor palace at The Vyne on the site of earlier medieval buildings. A powerful courtier during the reigns of Henry VII and Henry VIII, Sandys became Lord Chamberlain in 1526. By this time, he had undertaken a major building campaign at The Vyne, which seems to have been largely complete by the mid-1520s. The Oak Gallery is one of the earliest examples of a long gallery in the country, and Lord Sandys's chapel was the most splendid known outside those of the royal palaces. The Vyne prominently displayed the royal arms in the panelling of the Oak Gallery, and the king's portrait appears in the stained glass of the chapel, two areas of the house where The Vyne's Tudor origins remain particularly evident.

In 1653, The Vyne was sold to Chaloner Chute, Speaker of the House of Commons.  Chute reduced and modernised the house, but after his death in 1659 few further changes were made until the mid-18th century. Chute ownership from this period on was marked by keen interest in the building's Tudor past, reflected both in new alterations to the building and efforts to preserve and enhance sixteenth-century aspects. John Chaloner Chute (1701-76) belonged to the 'Committee of Taste' that oversaw the decoration of Horace Walpole's Gothic Revival villa at Strawberry Hill; alterations to the house during John Chute's ownership drew on Walpole's advice and inspiration.  William Wiggett Chute (1800-1879) completed further works to The Vyne in the 1840s that similarly aimed to create a historically inspired interior in keeping with the house.

The Chapel at The Vyne is among only a few private chapels of the pre-Reformation period in England to survive with much of its interior intact, and is particularly notable for the preservation of superb sixteenth-century choir stalls and stained glass. Instruments and music with provenance to the house are not known to survive, but a 1541 inventory confirms the presence of an organ and books of polyphony, as well as other service books, in the chapel and sacristy. 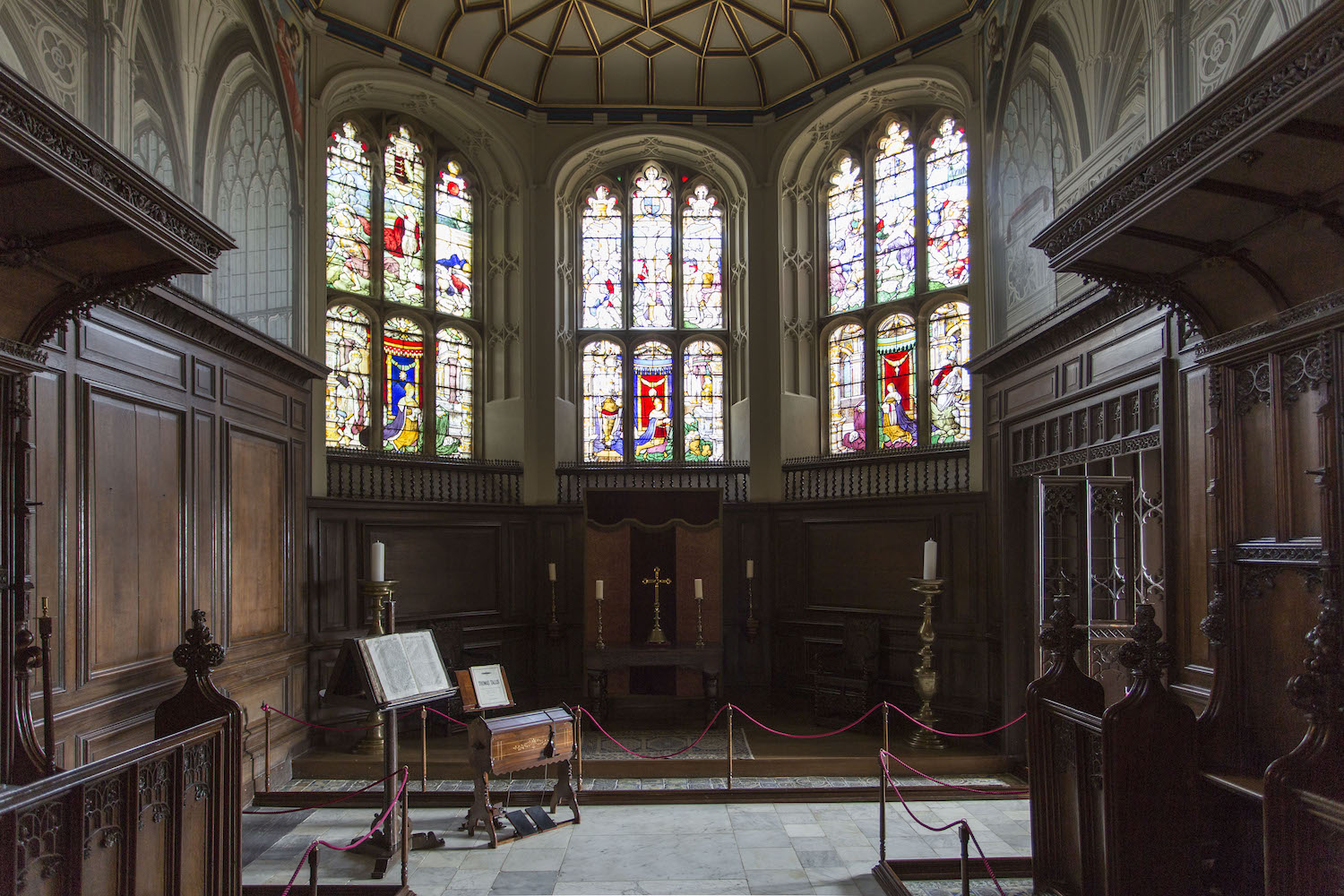 The chapel project at The Vyne draws upon insights of the multidisciplinary research project The Experience of Worship led by Professor John Harper of Bangor University, Wales. From its inception in 2009 until 2013, The Experience of Worship was part of the UK-wide research programme Religion & Society, jointly funded by the Arts & Humanities Research Council and the Economic & Social Research Council.

The project aims to investigate religious life in late medieval cathedrals and parish churches through making (of artefacts, organs and vestments) and doing (liturgical enactments), and by integrating the responses of today's participants with historical research. A wide range of artisans created materials for the project, and musicians, clergy and parishioners participated in enactments at Salisbury Cathedral and St Teilo’s church near Cardiff. These events moved beyond previous attempts at liturgical reconstruction to consider movement, space and sensory aspects of worship, as well as the more often studied sequences of prayer, plainchant and polyphony.  Resources, including videos and recordings of the enactments as well as texts, music and descriptions of objects, are freely available on the project website. The essay collection Late Medieval Liturgies Enacted: The Experience of Worship in Late Medieval Cathedral and Parish Church, ed. Sally Harper, P. S. Barnwell and Magnus Williamson (Ashgate / Routledge, 2016), includes essays on medieval liturgy and modern enactment by the main project researchers.

Work at The Vyne drew upon insights gained from the liturgical enactments mounted in the cathedral and parish church, while extending the reach of the The Experience of Worship to encompass a private chapel. Polyphonic items for the liturgy were drawn from the Missa Dominica (Sunday Mass) by Nicolas Ludford (c1485-c1557), whose Lady Masses are among the most important surviving sacred works from Henry VIII's court. The Missa Dominica is preserved in a complete set of Henrician partbooks, British Library Royal Appendix 45-48, which includes an organbook.  The chants that would have been heard by Henry VIII at The Vyne in 1535 figure in a new edition by Professor Harper, Dr Sally Harper, and Dr Matthew Cheung Salisbury, published by the British Academy as the first chant volume in the series Early English Church Music.

The Vyne is normally presented as an intimate family home with a history spanning the centuries, from its remaining Tudor features through later alterations.  Recently the house began to leak, and the National Trust began a major reroofing project. Between August 2016 and February 2018 The Vyne will be entirely clad in scaffolding, affecting light levels and access routes, and important areas of the house will be inaccessible. The Visitor Experience side of the Roof Project aimed to seize the opportunity for a creative response to these constraints rather than closing the house.

The temporary project offered the possibility for alternatives to the usual 18th-19th century presentation based around surviving collections. The Vyne's early modern past cannot normally be done justice, as the fine Tudor rooms lack Tudor contents on which to base the story.  In this project, the aim was to fill empty rooms with new media to convey the Tudor style and richness missing from The Vyne's furniture and other collections. 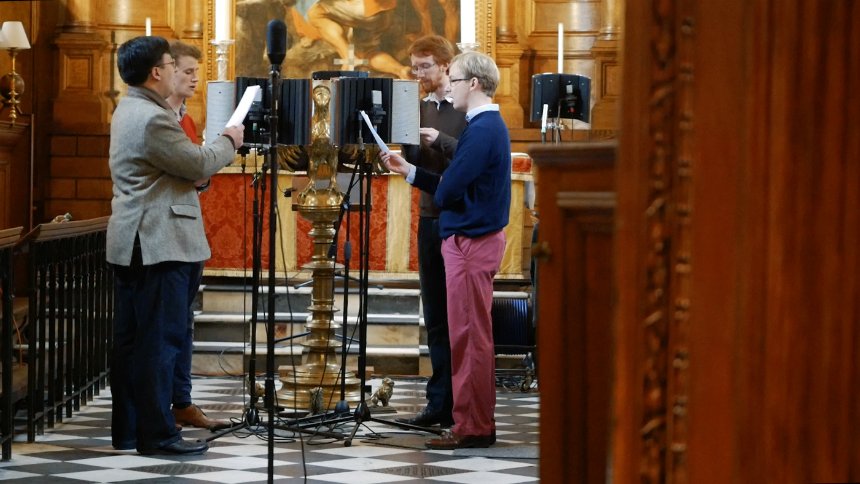 A Project Visitor Experience Team was created from house, regional and freelance staff. The team's project plan defined three interpretation themes:  (1) a Tudor treasure; (2) a cherished Tudor legacy; (3) opening up and conserving the legacy now.  Themes 2 and 3 were developed with in-house research and the building team. Theme 1 was developed through partnership, initially with Oxford University Humanities. A seminar helped to define the most significant moment of The Vyne's Tudor history: the third visit of Henry VIII, with his new queen Anne Boleyn, in 1535. A smaller group of historians explored this with the team, and Dr Lucy Kaufman (Oxford University) continued as academic advisor throughout. A Mass during Henry VIII's visit on the cusp of the Reformation stood out as a story that could highlight the significant private chapel. Music historians Dr Katherine Butler (Oxford University) and Professor Jeanice Brooks (University of Southampton) provided initial advice, identifying the reconstruction of a Lady Mass as most appropriate and proposing Nicolas Ludford's music for the polyphonic elements. The decision to pursue this idea meant that significant expertise in liturgical reenactment became crucially important, and Professor John Harper (University of Bangor) joined the project, directing the selection and combination of sung, spoken and gestural elements of the ritual.

The chapel is small and the stalls fragile, permitting only 10 visitors at a time to enter the space.  The condition of the stalls precluded live reenactment of the Lady Mass, but the size and layout of the chapel are appropriate for the installation of an immersive soundscape, creating a spatialised audio illusion of the Mass experience. Professor Harper constructed an enactment map representing the physical position and gestures of participants during the liturgical sequence, cued to the spoken and sung elements of the ceremony. Sound designer Peter Key recorded the polyphony, sung and spoken prayer, organ, and gesture. Participants and performers included Prof. Harper, Dr Matthew Cheung Salisbury (University College Oxford), Reverend Jeremy Davies (former Precentor, Salisbury Cathedral), adult singers from Worcester College Choir and boys from Trinity Boy's Choir, Croydon. Organ sections were played on the Wetheringsett organ, from the Early English Organs Project, which brought ground-breaking research into pre-Reformation organs to bear on the project for The Vyne.

The sounds were recorded in three different locations - the organ at St Swithun's church in Worcester, the boy singers in a small church in Surrey, and the remaining music and sound in Corpus Christi College, Oxford. Each element was recorded separately, using close microphones and baffling to reduce reverberation so that playback in The Vyne would pick up its own chapel's acoustic. 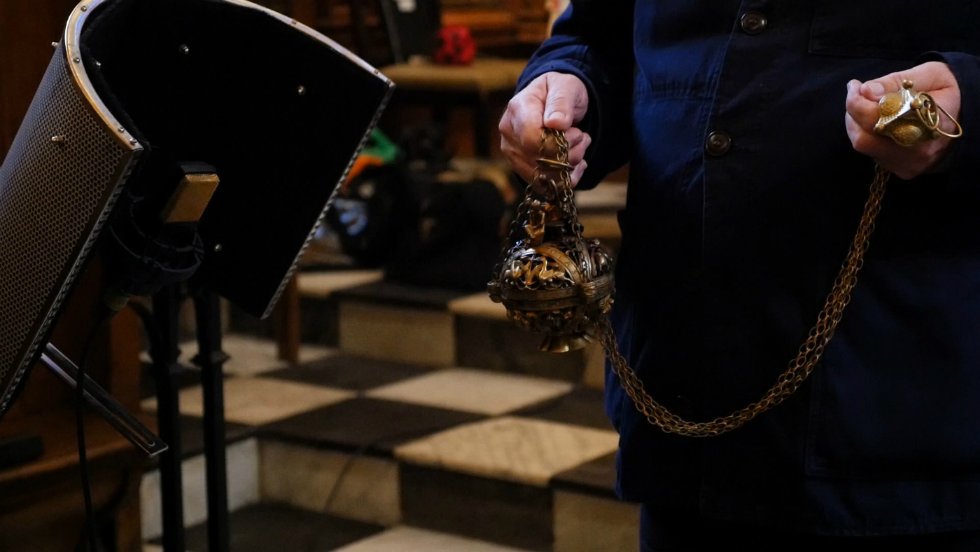 Peter Key then assembled the materials according to the enactment sequence, using speaker array to create realistic directional and locational effects. Visitors to the chapel hear the voices and keyboard from their positions in stalls, at the lectern or altar, and from the organ position as appropriate; and can experience simultaneous elements (for example, the celebrant's prayers at the altar during the performance of music from the stalls) in different ways according to their own movement through the chapel space. The soundscape registers the subtle change in volume of the priest’s voice as he turns from the altar, the clink of the thurible chain as incense is blessed, and other Foley effects such as footsteps and the faint rustle of clothing.

“Bobbin About to the Fiddle”: New Resource for Domestic and Social Dance in Georgian Britain
Sounding Erddig, Listening to the Past
Sacred Stories at Tatton Park
END_OF_DOCUMENT_TOKEN_TO_BE_REPLACED