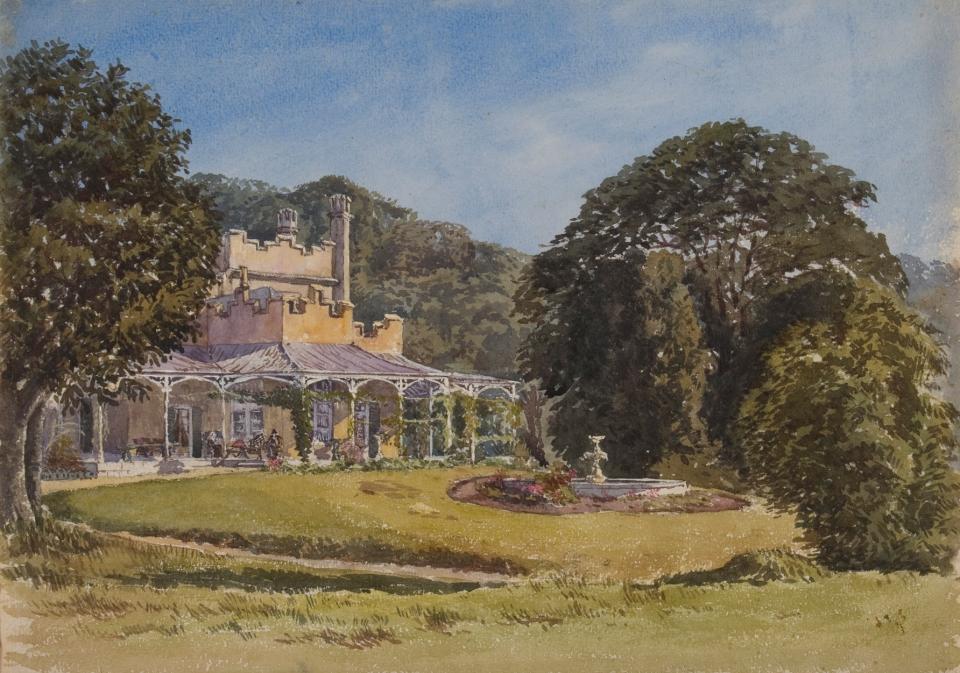 Vaucluse House began as a small cottage built in 1805 by an eccentric Irish knight, Sir Henry Browne Haye, on the edge of Sydney Harbour.  From 1827 to 1862 it was the home of William Charles Wentworth – explorer, barrister, patriot and statesman – his wife Sarah and their ten children.

Wentworth planned Vaucluse as the seat of a powerful dynasty, a grand Gothic Revival mansion set within an extensive estate.  Although never finished, the house contains one of the finest surviving Australian Colonial interiors. 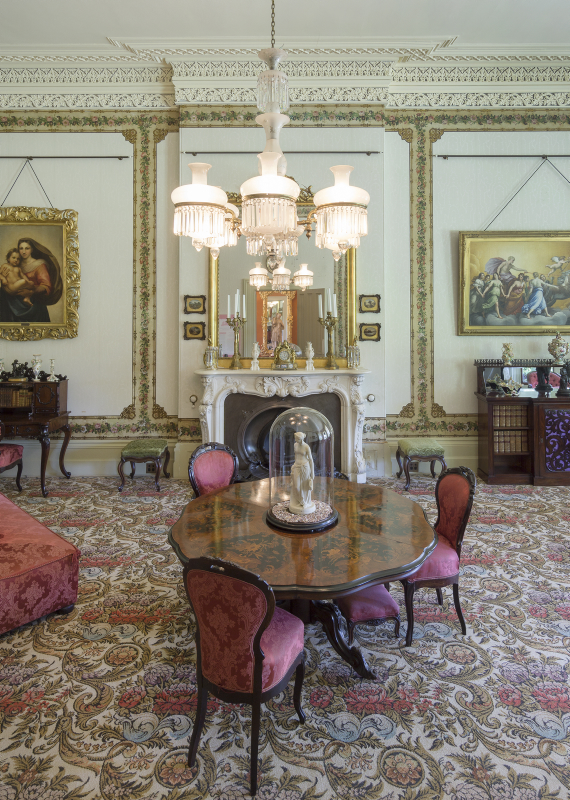 Vaucluse House and its grounds remained in Wentworth ownership until 1910 when it was acquired by the New South Wales government and, a few years later, redeveloped as a house museum.  Now managed by Sydney Living Museums (SLM), it is presented to reflect the period of the Wentworth family’s occupation. The interiors contain many original Wentworth pieces together with a rich collection of furniture and objects from the early to mid 19th century.  While no original musical instruments or sheet music survive in the house, the decision to acquire a Collard and Collard grand piano for the house in 1980, a piano which had been made and exported to Sydney in the mid-1860s, was based on a mid-19th century house inventory.

In October 2015, Sydney Living Museums celebrated the centenary of the decision by the original trustees of Vaucluse House to establish a house museum on the site and invited the public to share in a wide variety of activities which included Whale Tales and an Aboriginal performance on the estate beach, tastings of colonial food, tours of the Mausoleum and estate and music performances both in the house and throughout the grounds.

In recent years, staff at the Caroline Simpson Library & Research Collection (CSL&RC), Sydney Living Museums, have worked with curatorial and other staff to improve knowledge of the history of domestic music making in SLM’s historic houses.  This has been accomplished through an ongoing project of researching, cataloguing and digitising sheet music from a number of SLM properties including Meroogal, Rouse Hill House & Farm and Throsby Park.

In 2011, musicologist Dr Graeme Skinner was commissioned to evaluate and report on the sheet music collections held in these properties and he has continued to advise SLM on this material and its contexts. Honours and doctoral musicology and performance students from the Sydney Conservatorium of Music (SCM) have been using these collections as the basis for their research and both SLM and the SCM have been working towards closer collaboration in the research and performance of these collections as we seek to know more about musical life in colonial Australia.

In mid 2015, Dr Matthew Stephens, research librarian at the CSL&RC, was asked to develop a centenary celebration programme of music in the drawing room at Vaucluse House.  This request for an afternoon of music specified a performance that would permeate the historic interiors of the house and yet be flexible enough to allow visitors to slip in and out of the drawing room as they pleased.

The Approach to Programming

While SLM maintains considerable holdings of sheet music in a number of its historic houses, some properties such Elizabeth Bay House and Elizabeth Farm do not have any surviving examples indigenous to the property.  Similarly, Vaucluse House has no holdings of sheet music provenanced to the family.  The search for piano repertoire for the performance began at Rouse Hill House & Farm, a property owned by multiple generations of the one family for over 170 years and with a large sheet music collection dating back to the 1820s.  A study of local newspapers, obtained digitally through the National Library of Australia’s database TROVE, confirmed the popularity of some of our choices of Australian compositions published in the 1850s.  We also used TROVE to identify digitised copies of music sold in Australia that matched the themes and date ranges we wished to represent but examples of which we did not hold in our collections.

It was decided that two contrasting sets would be repeated over a period of three hours; the first consisting of the Australian compositions we had found which complemented the early 1860s piano in the drawing room: 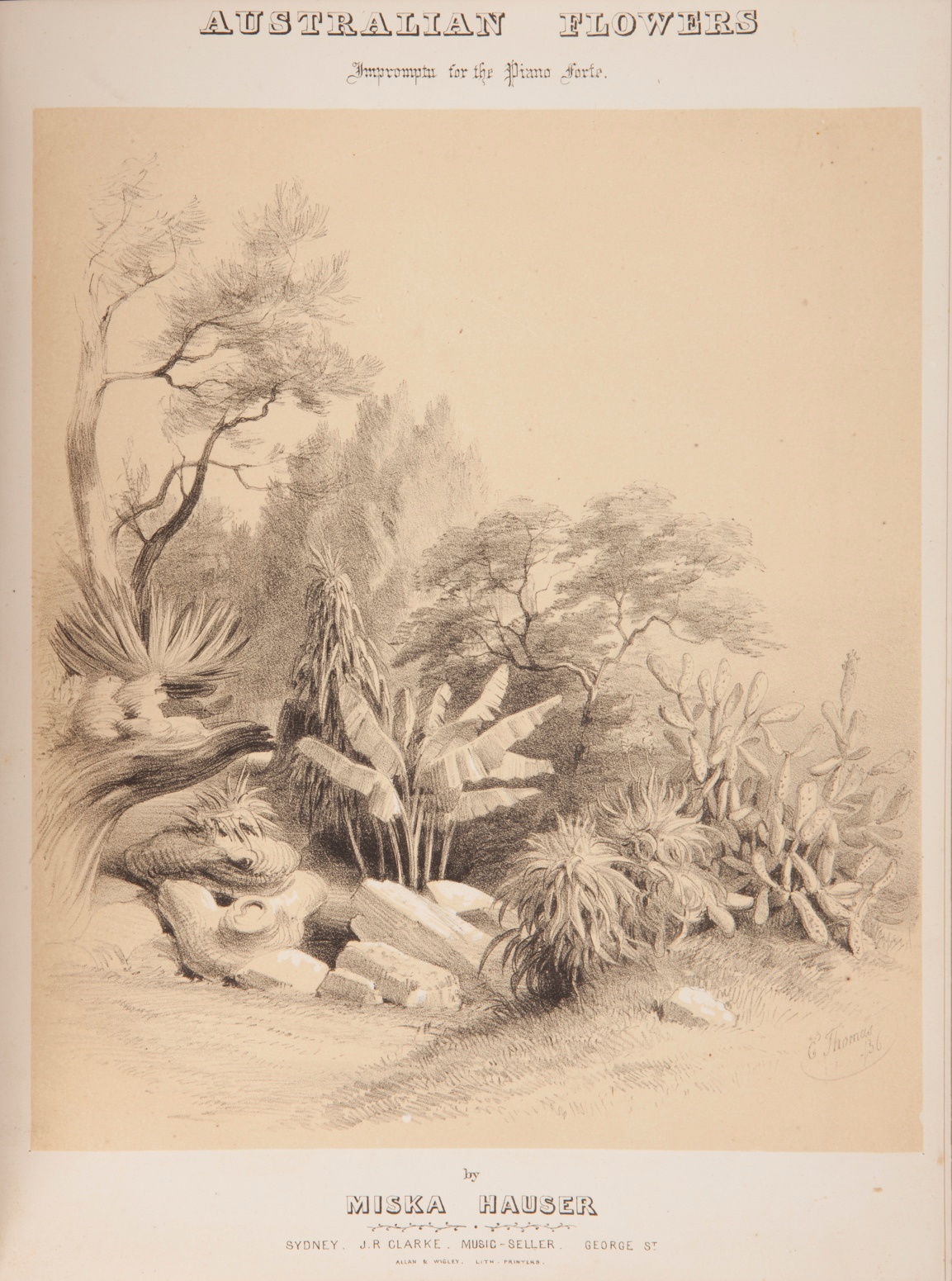 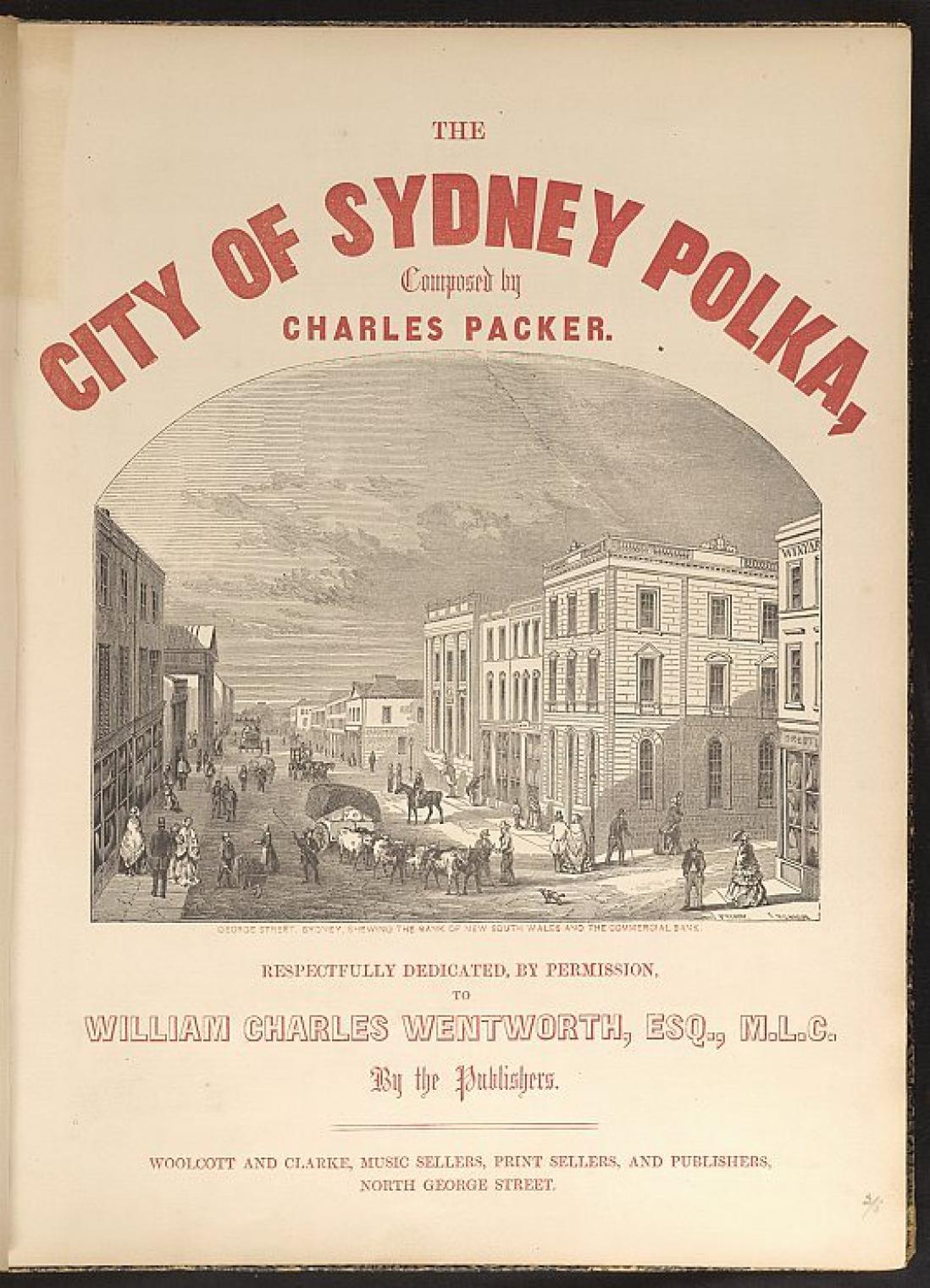 The second set featured two World War I songs known to have been sold in Sydney and were contemporaneous with the decision to develop the estate as an historic house museum:

Each set was opened with Charles Packer’s The City of Sydney Polka, published by the Sydney firm Woolcott and Clarke in 1854, and dedicated by the publisher to the owner of Vaucluse House, William Charles Wentworth. 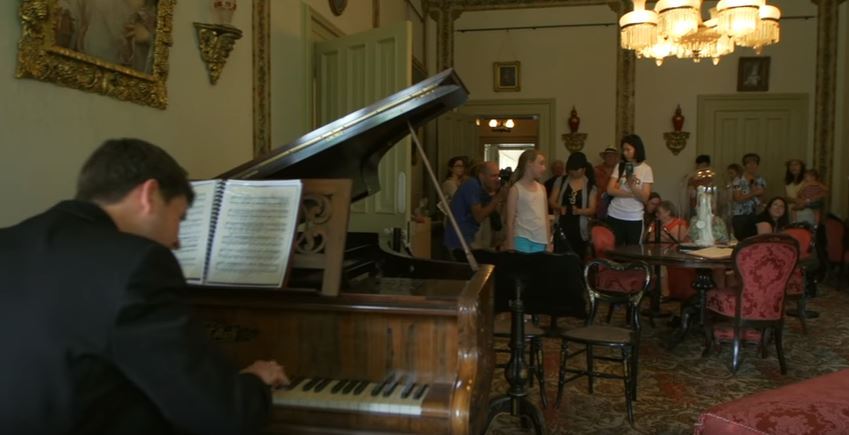 James Doig, a postgraduate pianist from the historical performance unit at the Sydney Conservatorium of Music was employed to perform on the day and Matthew Stephens narrated ‘The World at War: Descriptive Piece’.

Conservation of the Collard and Collard Grand Piano

The centenary celebration was considered a good opportunity to commission piano technician Ron Overs to undertake conservation work on the piano in preparation for the performance. The piano’s keyboard and mechanism was removed from its case and transported to the Overs Pianos workshop.  The conservation work focused on regulating the action of the piano by adjusting its mechanics to compensate for wear such as broken pins, broken vellum hinges, hardened felt and warped timber. 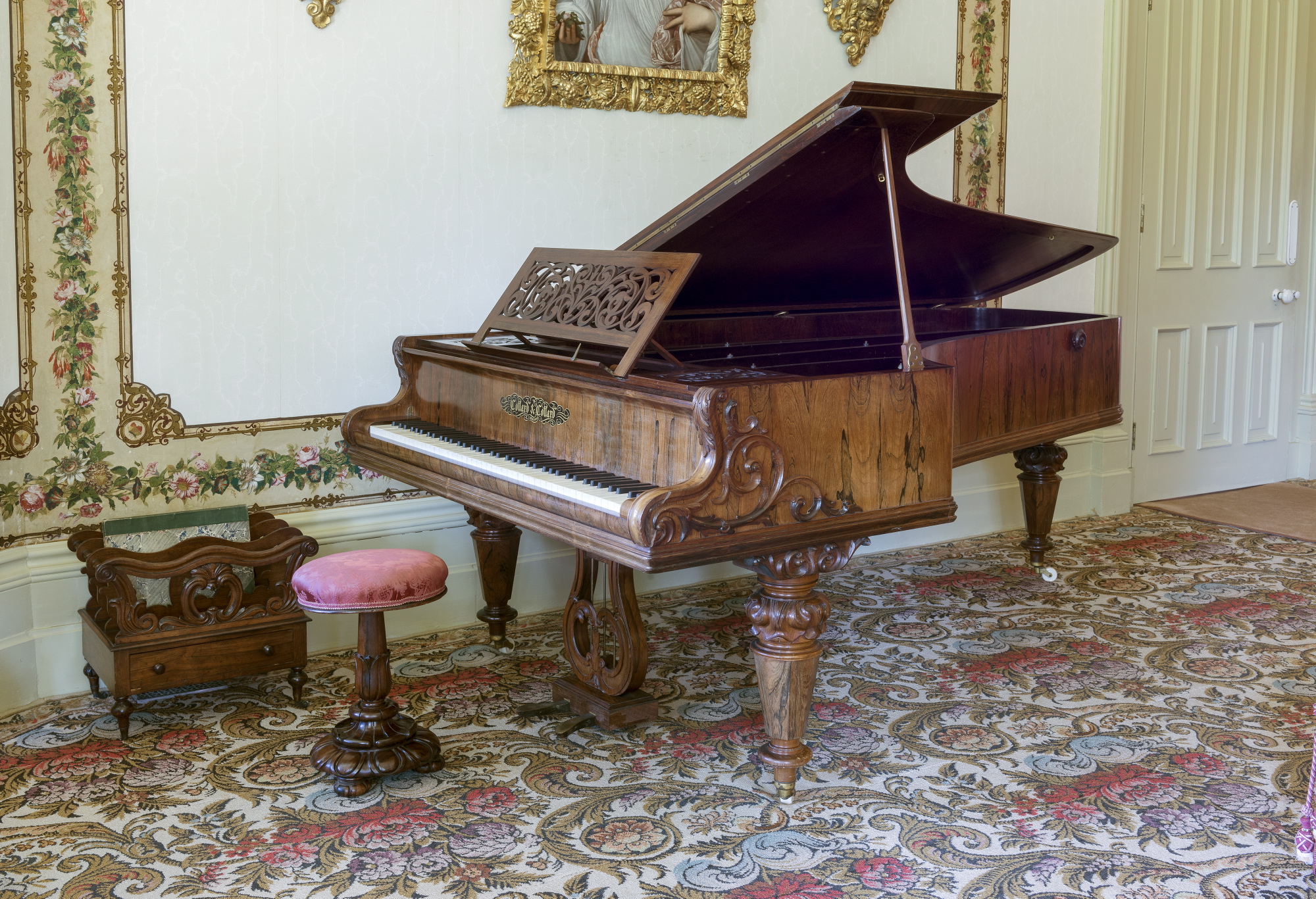 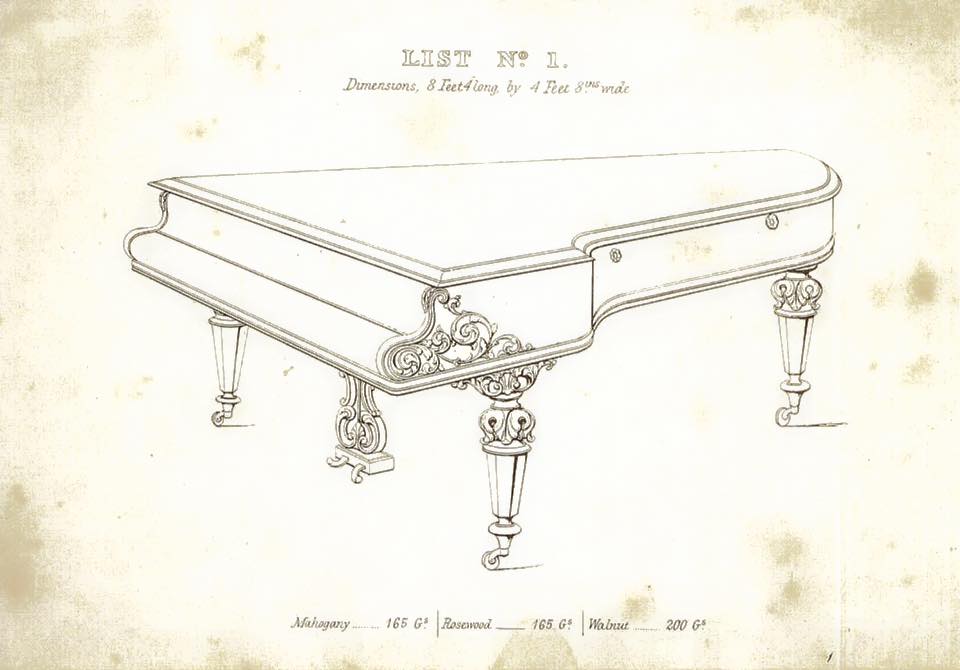 Ongoing Public Access to the Research and Performance Outcomes

On the day of the centenary, over 1200 people entered the house and heard the piano permeating its many spaces.  The feedback on the day was excellent and we found that visitors were returning to the space to hear multiple performances.  The City of Sydney Polka by Charles Packer was used as one of the promotional hooks for the centenary day and audiences were invited to hear what was advertised as the first performance of the piece in Wentworth’s home.  Despite the music being dedicated to WC Wentworth, he was living in England with his family at the time of its release in 1854 and we believe that our performance in 2015 was most likely the first at Vaucluse. 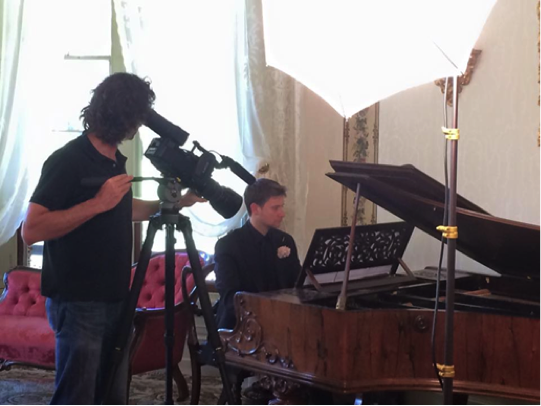 To counter the ephemeral nature of these types of performances and keen to provide access to the processes behind our preparations for the day, SLM produced a film, ‘Sweet Noise: Making Music at Vaucluse House’, which documents the choosing of the repertoire, the conservation of the piano, and the pianist’s preparation.  This small film has also been accompanied by a web story and additional stories have been prepared about the ‘City of Sydney Polka’ and ‘Australian Flowers’ with links to our performances on Soundcloud as well as digitised copies of the score.