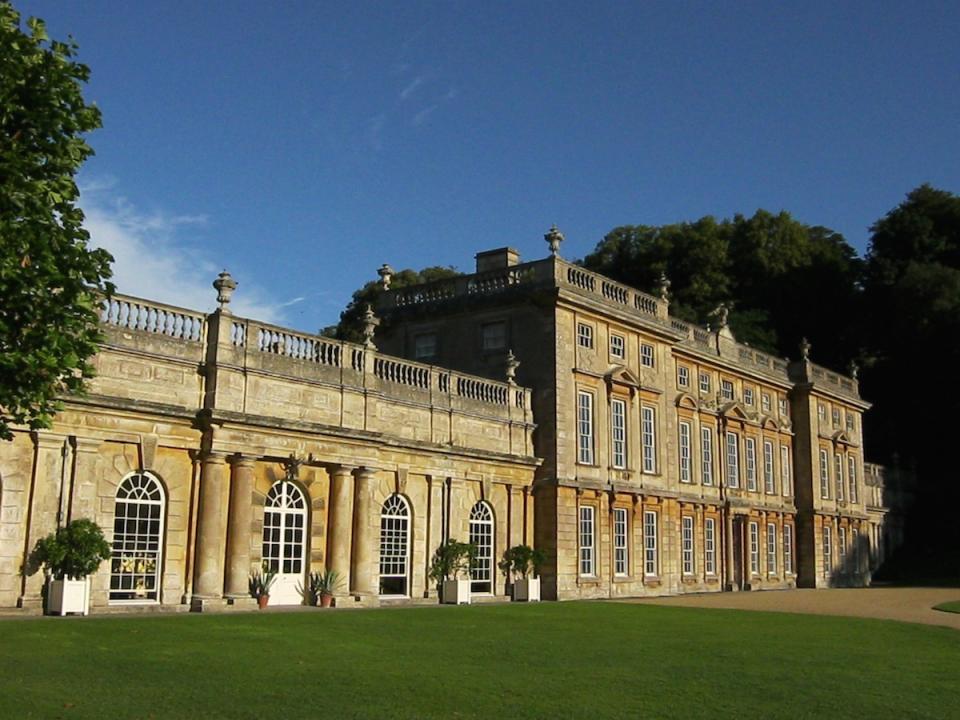 Dyrham Park (National Trust) is situated between Bath and Bristol. The estate was inherited by William Blathwayt in 1688, having married the heiress, Mary Wynter, two years earlier. His uncle, the lawyer Thomas Povey, had taken the young William under his wing, and secured him a job at the English embassy in The Hague in 1668. Blathwayt then worked tirelessly to become a Clerk to the Privy Council, and a key figure in the administration of the American colonies. By 1683, he had risen to become Secretary at War under James II. His competence and ability to speak Dutch led to his working for William III.

After Mary's early death in 1691, Blathwayt’s sister ran the household and supervised his three children, whilst William put his energies into rebuilding Dyrham Park from London. Work started with the construction of the West range, and later, surrounded by Dutch taste, Blathwayt directed the rebuilding of Dyrham’s East range from Holland. William III’s architect, Talmen, finished the house in 1704, and topped it with the eagle in 1705. The overriding influence of the Netherlands was evident in Blathwayt’s furnishings and paintings, although his taste was probably also influenced by the many works of art he originally acquired from his uncle. Thomas Povey’s collection included perspectives and trompe l’oeils by Samuel van Hoogstraten that hung in Blathwayt’s Whitehall house, and stimulated the admiration of Samuel Pepys and John Evelyn.

Although there is neither an extant music collection nor musical instruments belonging to the family, William played the violin, and his second son, John Blathwayt, was something of a young prodigy on the organ and harpsichord. Archival records show that William Blathwayt placed a harpsichord in the Vestibule, where gilt leather was hung on the walls. A receipt for the instrument shows it was purchased on the 2nd May, 1704. He planned for further music to issue from caged songbirds, thrushes, larks or blackbirds, in his entrance hall, plus a grander cage housing a tropical bird, to be hung from the ceiling.

To discover more about the musical heritage, and put it into practice, Dr Penelope Cave was invited by the National Trust to be a visiting artist-in-residence during 2015, whilst the building was being re-roofed. The rooms that were open to the public allowed the visitors to experience the five senses; highlights of presenting the house in this way included drinking real chocolate and hearing period music.

Dr Cave’s research into the musical background of William Blathwayt and his sons began with Gertrude A. Jacobsen’s 1932 book, William Blathwayt, a Late Seventeenth-Century Administrator; the transcripts of Monsieur de Blainville’s travel memoirs and letters; Nora Hardwick, ed., The Grand Tour, Letters & Accounts relating to the Travels through Europe of the brothers William and John Blathwayt of Dyrham Park 1705-1708  (Bristol: Alan Sutton Publishing, 1985); and Nora Hardwick, ed., A Diary of the Journey through the North of England Made by William and John Blathwayt of Dyrham Park in 1703 (Dursley, Gloucestershire, 1977). Articles on the house and its contents include Karin-M. Walton, “An Inventory of 1710 from Dyrham Park,” The Furniture History Society 22 (1986): 25–80. Such a wealth of previous groundwork offered a rich resource for placing William’s interest in the education of his two sons into context, and in assessing John Blathwayt’s abilities and interests; and, more generally, European musical networks; opera reception; and the dissemination of scores in the early 1700s. De Blainville compiled a further record of his travels which have been a rich source for further details of the Blathwayts' European travel (de Blainville, Travels through Holland, Germany, Switzerland, and Other Parts of Europe; but Especially Italy ... ed. Daniel Soyer and John Lockman, trans. Daniel Soyer, George Turnbull, and William Guthrie, 3 vols (Dublin: G. Ewing, etc., 1743)). Eleanor Selfridge Field, in A New Chronology of Venetian Opera and Related Genres, 1660-1760, expands on the music that the Blathwayts heard whilst in Venice, including Alessandro Scarlatti’s Il trionfo della libertà, from which twelve arias were copied and sent home. In Rome, John had lessons with Bernardo Pasquini, and visited and accompanied the great violinist, Corelli. He may well have met Handel at Ottoboni’s musical evenings.

The Blathwayt papers in the Gloucestershire Archives confirmed the meticulous nature of previously published research, and revealed a memorandum in William Blathwayt’s hand that showed he had intended for John to purchase violins whilst in Italy. Whether or not John bought a harpsichord, he certainly hired them abroad, and commissioned copies of music that were sent back to England. John, as the second son, did not inherit Dyrham Park when William Blathwayt died in 1717, but was left other property plus all his father’s musical instruments.

After an army career leading to the Battle of Culloden, John retained his love of music. In 1719, he became one of only two of the twenty elite founding directors of the Royal Academy of Music with musical expertise. His musical activities led to further acquaintance with the works of Handel and D. Scarlatti, and associations with Maurice Greene, Frederick Lampe and Charles Avison.

This research has been disseminated in:

Penelope Cave’s harpsichord recital with readings and slides, An Englishman in Arcadia, performed at several venues including Huddersfield University, as part of a HIP festival (May 2015); St Margaret’s Fernhurst, West Sussex (June 2015); and The Cello Factory, Waterloo (September 2015).

The research was essential for forming a repertoire to play to visitors at Dyrham Park. A small Italian harpsichord was hired from the West country maker, Colin Booth, and placed in the leather-lined Vestibule for monthly performances to the public, and workshops for both the volunteers, and a group of specialist harpsichord students.

Dr Cave chose English repertoire relevant to the period in England when John Blathwayt was growing up, and which was also useful for the volunteers who had some skill on the piano, and might learn to play the hired harpsichord. Late seventeenth-century composers such as Purcell and Blow were ideal in providing short pieces that were not too technically difficult for newcomers to the instrument.  She included Handel and other more virtuosic composers met by the Blathwayts on their Grand Tour, and whose work was promoted by the Royal Academy of Music, for her own performances. The workshops thus enabled some volunteers to play suitable music on the harpsichord for the visitors, and to talk about its relevance. There was some discussion as to whether Bach and Couperin might also be included as their dates were complementary, and volunteers then discussed the value of using composers whom John Blathwayt met, or could easily have heard or played, either at home or on his travels. One of the volunteers wrote, “I really like the sound of all the English composers, which I think sound really appropriate in the Vestibule at Dyrham. It fits. It is of the period, as, when the leather was put on the walls in there in 1702, John Blathwayt would have been 12, and already a brilliant player. The English composers sit comfortably there. That is how I feel.” Two or three of about a dozen volunteers made use of the instrument, and one learnt to check the tuning, and played regularly every week. A recording of late seventeenth-century repertoire was played in the room when Dr Cave was absent. 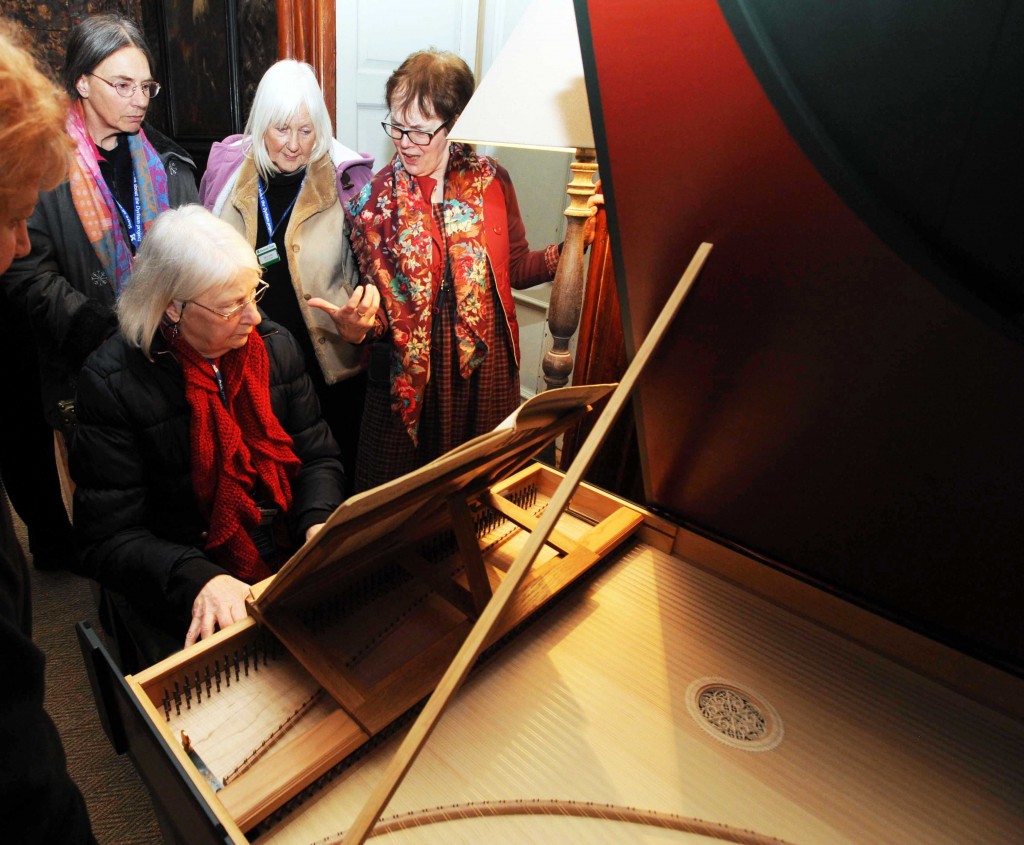 A student wrote, “It gave me a feel for the English harpsichord music of that period and more understanding of it as a result. I will certainly never forget the experience.” One volunteer, originally trained at the Royal Northern College of Music, e-mailed, “Thank you again for a most informative and enlightening day.”, and requested a harpsichord jack to show interested visitors.  Later, she wrote, “I just thought you might like to know that I am absolutely smitten with this harpsichord-playing!”

Dr Cave considered it of prime importance to generate music that had connections to the owners of the house, rather than a random choice of music from the period. She was also aware of the interest of the visitors who often came nearer, and talked to her between pieces. Although there was no exit poll, visitors’ feedback has indicated that it has been “beneficial in bringing the house to life and imbuing visitors with a warm feeling as they enter, with a greater sense and awareness of the era.” It seemed to draw people in, being appreciated as it was heard on approach to the vestibule, and a few chairs in the room were sometimes utilized; children often encouraged parents and grandparents to stay longer, and sat down on the floor to listen. She also encouraged them to try the instrument, under supervision.

Dr Cave has also recorded background music for a film designed to enhance knowledge of Dyrham Park’s gardens, currently in production, so that the musical component can be as closely linked to the house and its history as other elements of content.