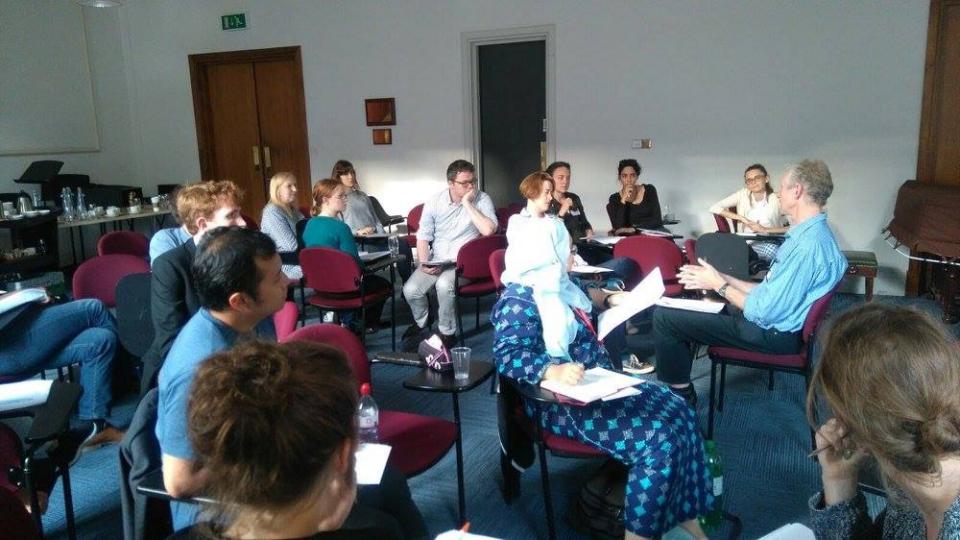 On 4th September 2017, sitting in King’s College London’s Maughan Library, I typed the word ‘heritage’ into a search engine, producing some 635,000,000 results in less than 60 seconds. Listed by Google with hyperlinks in blue and a short summary below in black typeface, the websites of large organisations including English Heritage and the Heritage of London Trust vie for the top position alongside the Oxford and Cambridge English Dictionaries and a Wikipedia article on the topic. Indeed, the latter’s précis points to ‘historic sites’ as “official [locations] where pieces of political, military, cultural, or social history have been preserved due to their historical importance.” The Cambridge English Dictionary posits a broader definition of ‘heritage’ as “features belonging to the culture of a particular society.” Therefore despite being a term readily in circulation, what constitutes ‘heritage’, and to whom, is by no means clear.  So a conference engaging with these kinds of issues through the lens of music was organised by Lisa Maria Brusius (KCL), Alexander Marsden (UNC), Kori Hill (UNC) and myself between 1st and 3rd September 2017 at King’s College London.

A popular Anglo-centric understanding of ‘heritage’ as evocative of historic sites like country estates within the English imagination was addressed most obviously by Kate Hawnt (University of Southampton). Her research on the interpretation of music in historic houses delves into the Russell family’s association with harpsichords at Mottisfont Abbey in Hampshire. Forging valuable relationships and links with the heritage sector, she is working for the National Trust team on an exemplar case study integrating music into the fabric of visitors’ experiences as something beyond being simply ambient, background sound. The project fruitfully addresses how readings of the house can change by virtue of gaining insights into the music of the property’s past.

These themes of music, space and place came to the fore in a paper by Susannah Knights (KCL) on experiencing heritage in Tunis’s city centre. The Mézoued, an instrument brought to shantytowns during the French colonial period and which continues to be played at a variety of venues in the metropolis, elicits different feelings amongst different social groups. Seen as a beautiful cultural expression on the one hand, but also a pretext for violence on the other, urban logics render the music two different things. Can musical repertoires have multiple heritages as groups stake their claim to traditions from varying perspectives and histories? Presented in the same panel on North African cultural heritage, Tamara Turner (KCL) recently completed doctoral research on the Algerian Sufi tradition called diwan. Growing out of the trans-Saharan slave trade, this ritual music features Black African songs and is increasingly thrust into the limelight as an example of the country’s intangible cultural heritage. As part of this contemporary trend, Migzawa troupes enact the ritual on stage for public music festivals, raising important questions about how to theorise the tension between the ritual and its staged version, which often comes to affect the very thing itself. 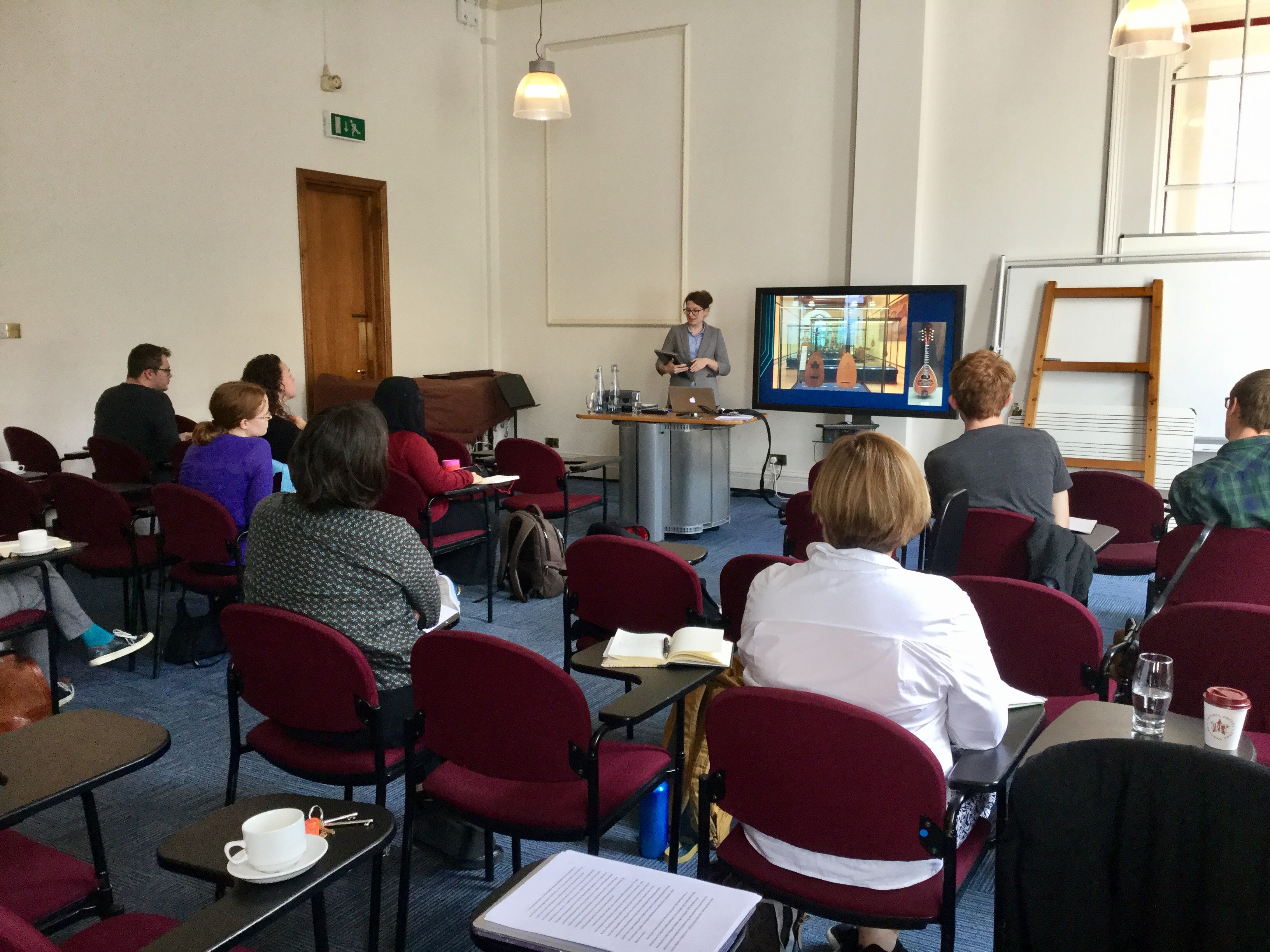 Feedback mechanisms that shape, and are shaped by, ideas of ‘heritage’ also emerged as a central issue in the conference’s reading group: an introduction by Estera Jaros (KCL) on patrimony in Brazil was followed by a lively discussion with David Pier (UNC) via Skype about his book Ugandan Music in the Marketing Era: The Branded Arena. UNESCO’s approach to intangible cultural heritage is analysed in terms of ‘triage’, a concept first used in battlefield medicine in which potential recipients of aid were ranked by (1) how close to death they were and (2) how likely they were to survive if given help. This plays out in the arts – particularly the ebigwala trumpet tradition from Busoga – whereby a musical practice is presented as “endangered yet still salvageable” to meet UNESCO’s criteria for “urgent safeguarding”. Pier’s close research informant Alibatya “learned to promote this heritage in salvage terms,” emphasising the vulnerability of a little-known, regionalised music/dance genre. The ‘triage’ approach can be situated within a broader context of marketing and promotion, where Ugandans are learning to ‘perform’ what they understand Western organisations are looking for in order to receive assistance. In doing so, a relatively obscure tradition from the eastern region of Uganda has been resurrected and heralded as national property, (re)creating an intangible cultural heritage that is as much a product of the present as of the past.

The same argument was made at the conference with reference to the idea of ‘nostalgia’, framed as being something we currently perceive to be lacking and therefore attempt to reclaim from the past, even if it is imagined rather than real. Nicholas Rheubottom (KCL) offered a detailed musical analysis of ‘Who comes so dark from ocean’s roar’ by John Wall Callcott to discuss how glees in 18th century London became “objects of engagement” for listeners to both recollect the past and occupy it in the same moment through artistic negotiations of the ‘sublime’. Similarly, in relation to rap music known as ‘grime’, Alexander Marsden (UNC) highlighted how ‘flow’, or the way the lyrics are delivered rhythmically, is a marker of genre identity, in which singers not only use a style of flow popularised around the millennium, but also evoke the entire early, artistic scene through the performance of nostalgia. Are nostalgia and heritage the same things? Does associating the former with reclaiming the past and the latter with preserving the past paint a too simplistic picture?

A paper by Georgie Pope (KCL) offered yet another fresh reading by examining a community of monks from Assam, who were officially sanctioned to represent Indian culture abroad and were therefore invited to perform a type of monastic dance called Vrindavani Paal at the British Museum. The physical and creative journey this dance undertook from its devotional context in India to its exhibition performance in the UK resulted in numerous transformations. Attempting to appear more classical to British audiences, the tanpura instrument provided an underlying drone to keep the performers in tune at the museum, a feature that would be entirely absent inside the temple. Does the meaning of these cultural productions change when we look at ‘routes’ rather than ‘roots’ in discussions of heritage? This research encourages scholars to consider traditions as composite forms with multiple origins, histories of power and forced displacements that often make detours via the nation state: an ongoing process of movement and mediation. 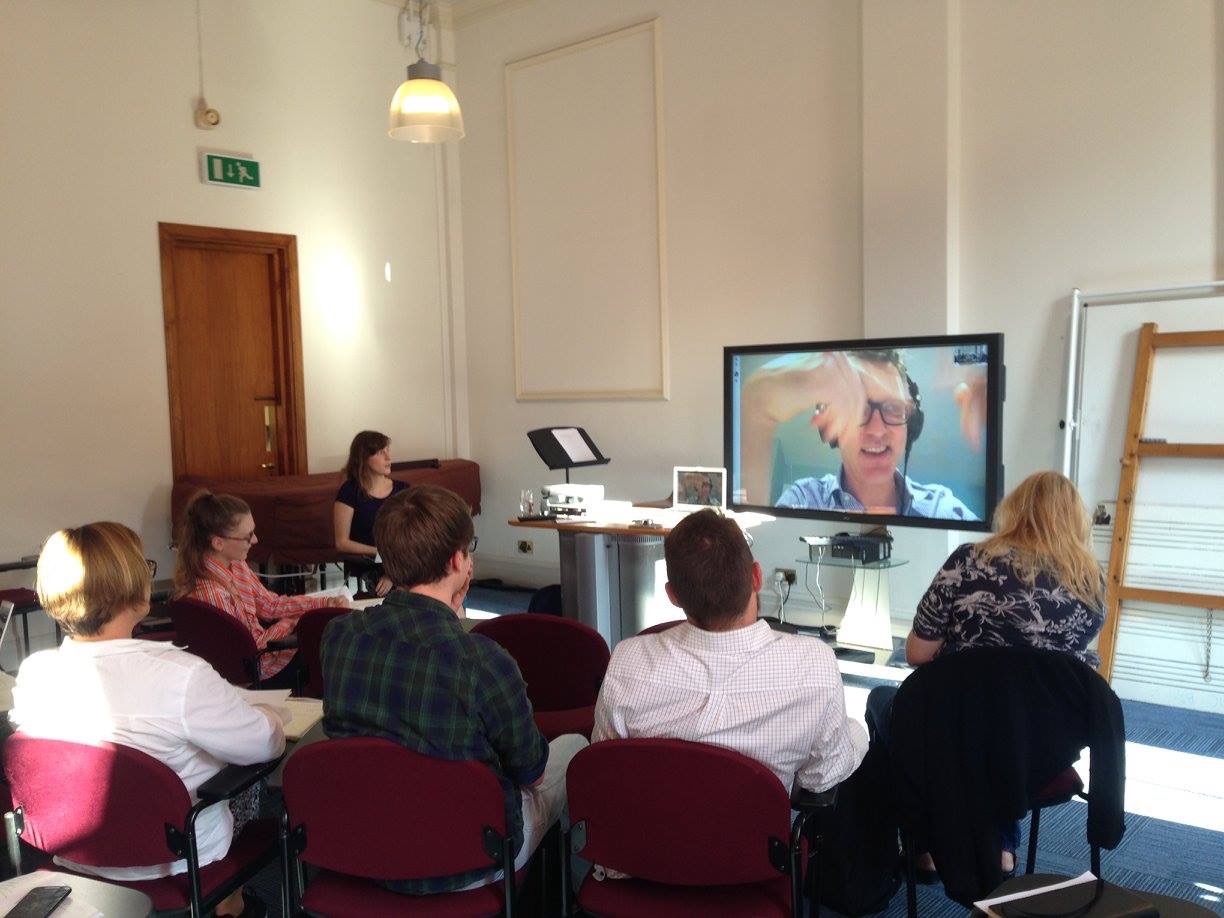 These intersections of the local, the national and the global in the formation of cultural identities were important tropes in three presentations. Firstly, Giles Masters (KCL) gave a clear account of how heritage was put to the service of conveying a certain image of national culture in the 1931 festival organised by the International Society for Contemporary Music (ISCM), which was hosted in Oxford/London. Music befitting nostalgic merry England, historical pastoral modes and rural imaginaries was heard in abundance, such that despite being a transnational organisation, assumptions of autonomous nations were integrated into all ISCM’s activities, inviting a reading of musical heritage inflected by patchwork internationalism. Similarly, Grace Kweon’s (UNC) observations about sageuk costume dramas, produced for a global audience, show how direct connections between the historical heroes of the past and K-pop idols of the present allow the industry to claim a distinctly Korean heritage, meanwhile the musical sounds are more suggestive of a pan-Asian aesthetic. Finally, Marco Fatichenti raised the ways in which musicians absorb stylistic traditions in their performances through reference to Granados’s recorded legacy. Studying the Spanish pianist and composer who recorded himself playing his own music offers critical routes of enquiry regarding the processes of transmission and distribution that are deeply connected with concepts of heritage. 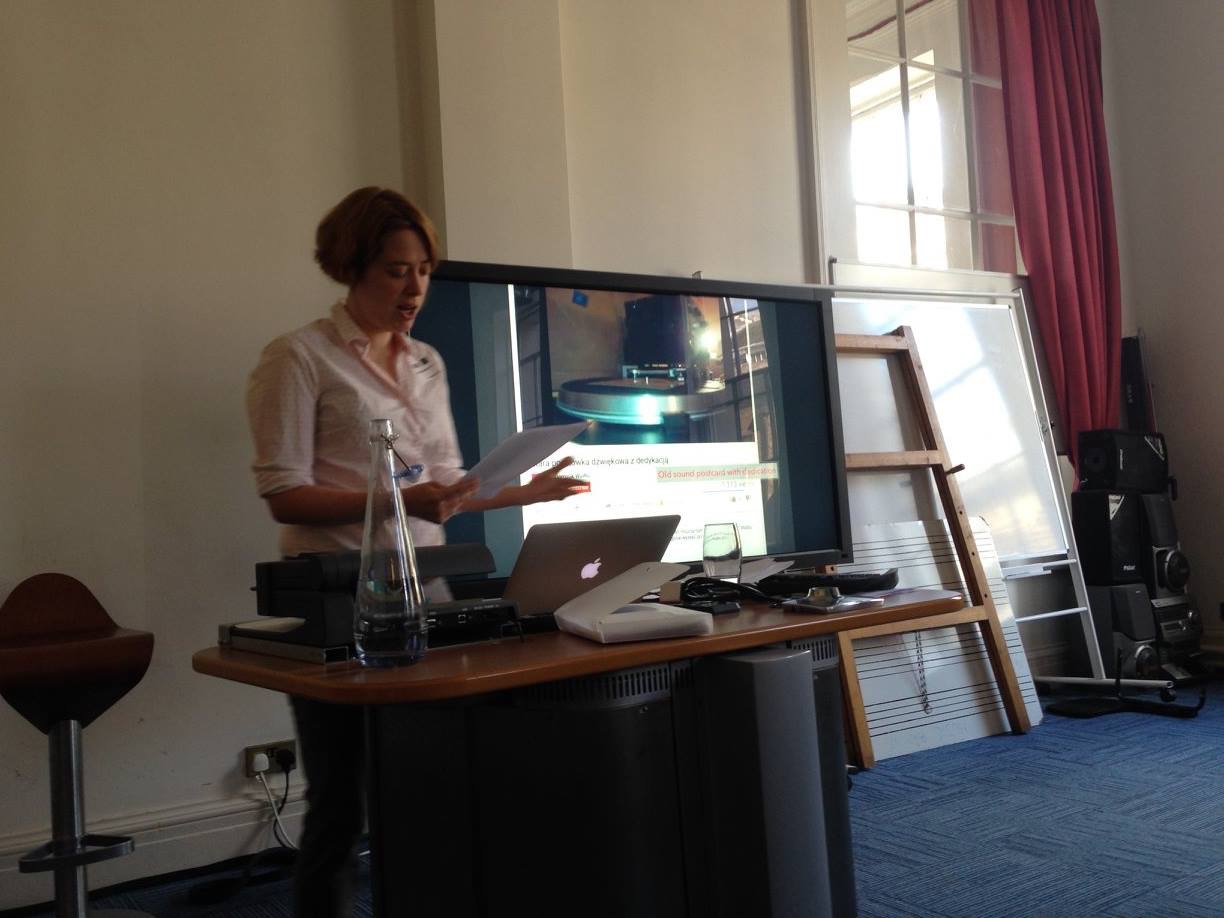 The distribution and duplication of music across a nation was a central theme in the keynote address by Andrea Bohlman (UNC). In her current research exploring amateur sound recording in Poland between 1940 and 1980, she examines the culture of the copy. ‘Sound postcards’ inscribed with pre-existing songs from across a range of popular music genres were nevertheless contraband. Yet these rectangles measuring 18 by 22 centimetres and decorated by recordists became objects of affection for many rock fans, but she resisted reading the sound postcards as subversive in a global media moment in favour of considering the material specificity of these objects.

In so doing, the approaches to heritage gleaned from this review of the KCL/UNC conference have come full circle. Whilst at first glance the value of studying heritage through music lies in its very performativity – to move discussions beyond the straw man associations of heritage with historic sites, fixed spaces and custodians of the country house, the National Trust – we are reminded of the need to situate such performative acts within the particular social, cultural and economic contexts that bind them, in order to appreciate why value is placed on different traditions and customs in specific spaces. A highlight of the conference in attempting to get to the essence of these basic, fundamental issues was a workshop by Henry Stobart (Royal Holloway, London) on what heritage means in Bolivia. Situations and scenarios were presented as case studies to investigate different perspectives on creativity, sharing or imitation in creative work. That the debates about heritage in each and every small group provoked perhaps more questions than answers attests to the vitality of scrutinising broad themes by illuminating the general from the particular.