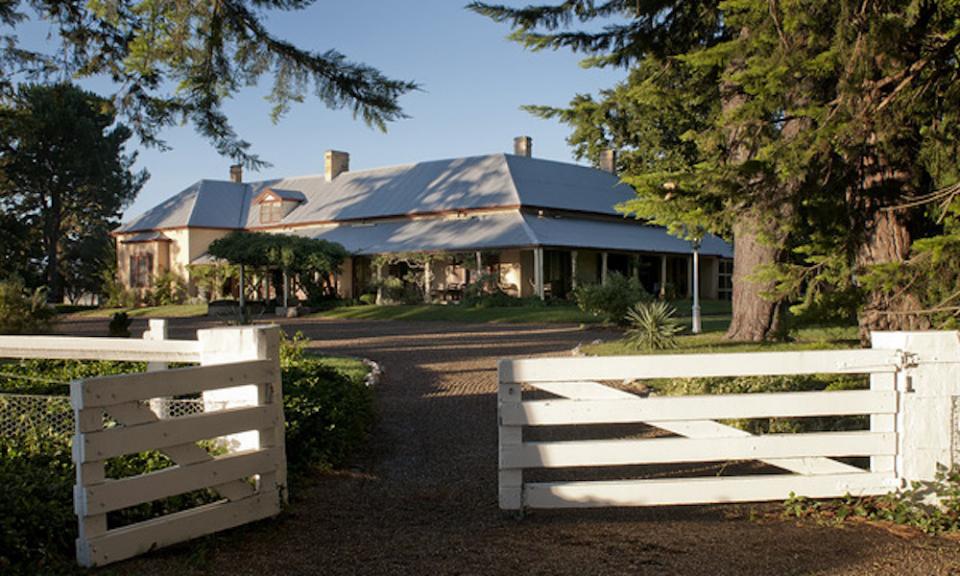 Lanyon is a sheep and cattle property on the southern outskirts of Canberra. Home to Ngunnawal people for thousands of years, the area was gradually taken over by European settlers in the 19th century.  John Lanyon and James Wright emigrated to Australia in 1833, and chose the location of Lanyon as the home station of their pastoral enterprise in 1835. Later in the year, William Wright arrived to join his brother.  John Lanyon returned to England in 1836, never to return, and William Wright was killed in a hunting accident, so that James was soon managing the property on his own. In 1838 he married Mary Davis, who had travelled to Australia with William Broughton, the colony's first bishop, and his family. The Lanyon enterprise benefited from the allocation of assigned convicts, and from 1836-42 had an average of about 35 laborers and a nursemaid to look after James and Mary Wright's 8 children. They lived in a slab hut which is no longer visible. The Wrights built several buildings on the homestead but by the early 1840s, were substantially in debt.

Andrew Cunningham emigrated to Australia from Scotland in 1845 with his wife, Jane, and three children.  He bought land not far downstream from Lanyon, and when James Wright was forced to sell, it was the Cunningham family who in 1848 took advantage of the foreclosure on the Wright’s land to step in and buy Lanyon. The Cunninghams achieved the prosperity denied the Wrights, and the house completed at Lanyon in 1860 was a dignified home built of mainly local materials, sharing a common wall with the original cottage. The Cunninghams had 60,000 sheep, and up to 50 people worked at Lanyon in the last years of the 19th century, living in a self-contained community with workers’ homes doubling as school-rooms and post offices.

In 1905, A.J. Cunningham, aged 58, married the musically gifted, 24-year-old Louisa Leman, and stories survive about how home entertainments flourished as the house was modernized and extended. In 1926, the Cunningham family sold Lanyon to Harry Osborne for his newly married son, then in 1930 the property was sold to the Sydney businessman T. A. Field, and resumed by the Commonwealth in 1974.

Knowledge of music at Lanyon Homestead is based on oral history recordings and limited written material. Like Calthorpe's House, Lanyon preserved class distinctions in the architectural design of the house and in the behaviour of the family members towards the farm workers and their families. Some of the best evidence about the musical life of Lanyon is preserved in interviews conducted by Susan Mary Withycomb with Helen Flint and Lily Brown, children of the farmworkers, in 1988. Lily Brown (née Cregan) remembered the grand piano bought in 1905 for Louisa as a wedding present by Andrew Cunningham, and the gift of an organ she made to the new church, St Edmunds Church of England at Tharwa.  She shared her own family memories of her father's music:

"He used to put the records on the old phonograph and he’d love to walk out and lean on the fence and listen to it. Then he’d stroll back in and put another one on and listen to that. That was … He enjoyed that. They used to come and sing it. It wouldn’t matter who they were. Dad would welcome them. He loved music and they would sing. Without any piano or anything to accompany them they would stand up and sing. We didn’t sing though. Wasn’t game I think, too shy."

Helen Flint (nee Rigny, born c.1910) recalled the weekly dances in the new hall at Tharwa. The music was provided by local musicians on a fiddle, two accordions, and piano played by Mrs Una West:

"We used to walk over to Tharwa to the dances. And they were beautiful dances! They had of course the real bush music. And we would walk over to the dance and then walk back at about two in the morning or three. It was fantastic."

Because three social classes and multiple nationalities are represented in the musical traditions of Lanyon, this property has hosted the greatest number of musical events generated by Listening to the Past and Performing the Past.

November 28, 2015: Listening to the Past. Two 50 minute ‘walking recitals’ engaged audiences of 15 people in participatory music, re-enacting music performed in the oral tradition of English and Irish farm workers in the kitchen, the stables and the front lawns, then moving inside the homestead for a drawing room repertoire of Mendelssohn, Chopin and popular songs of the late 19th century concluding with Christmas carols inviting audience participation.

October 29, 2016: Erin Helyard played two recitals of 19th century drawing room music from the repertoire of Australian rural women musicians of the late 19th century and gave a Masterclass to pre-tertiary piano students for the ANU School of Music on Lanyard's 1840s Broadwood. 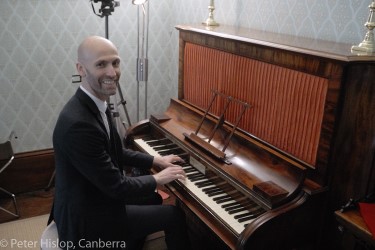 November 5, 2016: Performing the Past presented musicians and composers from different backgrounds, who engaged with the musical history of Lanyon to compose new works for the Lanyon Broadwood.

Alistair Noble Response: a composition exploring the relationship between time, space, memory and sound through a sonic biography of the Lanyon Broadwood.
Jennifer Gall  Rosebank Morning: Pianos are often played in times of deep emotion as a way for the pianist to make sense of what is happening. Perhaps pianos have memories of this kind of music and these memories somehow influence whatever else is played into the future. Rosebank Morning was sketched after a death some years ago and has taken a new shape in conversation with the Lanyon Broadwood.
Ian Blake How Many Ships Sail in the Forest: For several decades the Broadwood at Lanyon had been going its own way: preparing its own distinctive soundworld and an individual approach to tuning. Before the piano was restored, Blake recorded some of these sounds and improvised sonic gestures; and in this piece the rehabilitated piano converses with its wayward former self.
Sandra France The Lanyon Suite: A collection of short piano pieces depicting the diversity of experiences from this historic Australian homestead and property.

January 26, 2017 (Australia Day): acoustic music of the Irish with traditional music band Hoddle and Strings Attached. These performances, in different locations on the Lanyon property, sought to recreate the music of the oral tradition transplanted in Australia by Irish rural workers such as those who lived and worked at Lanyon in the mid-19th century. 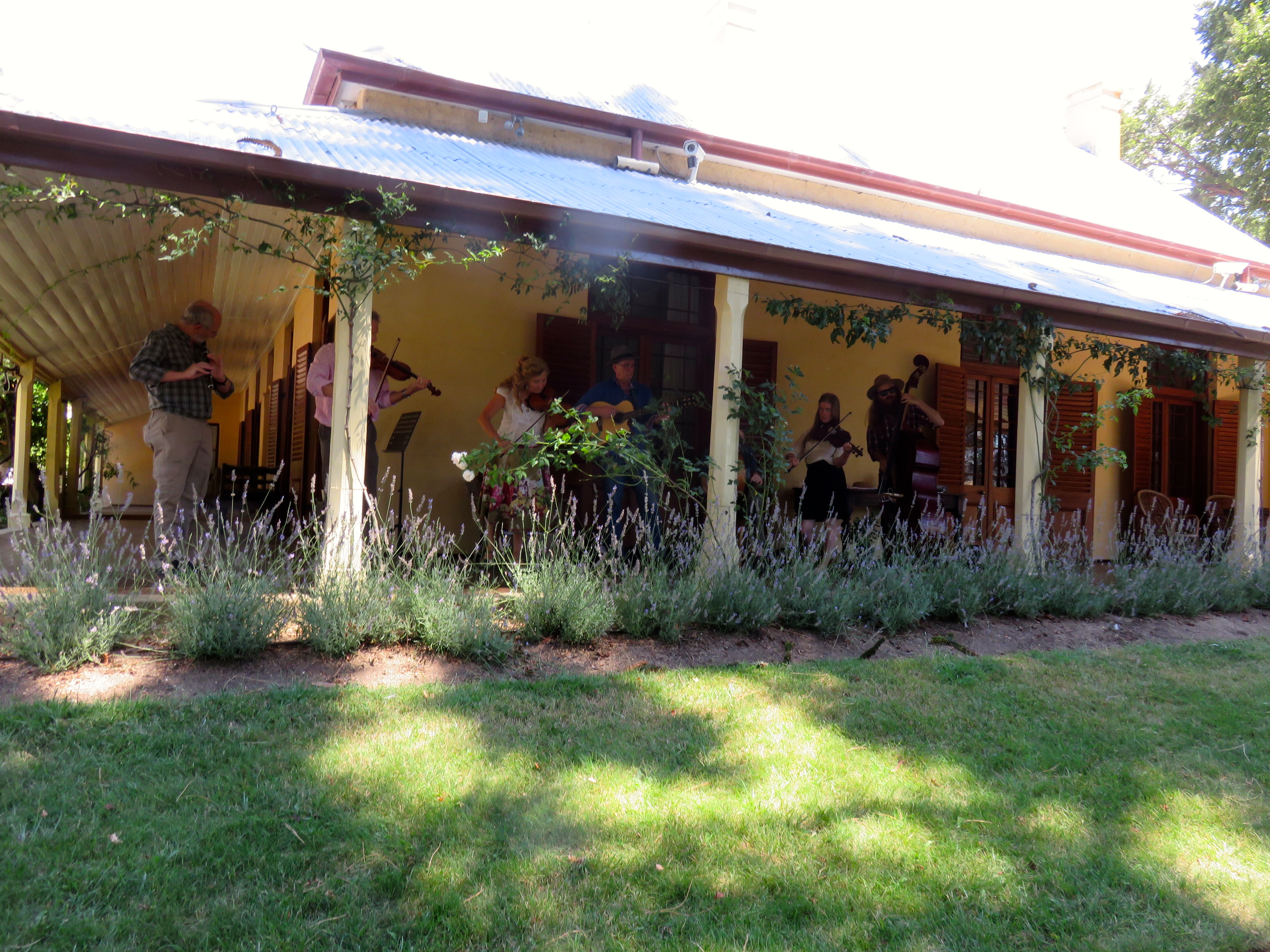